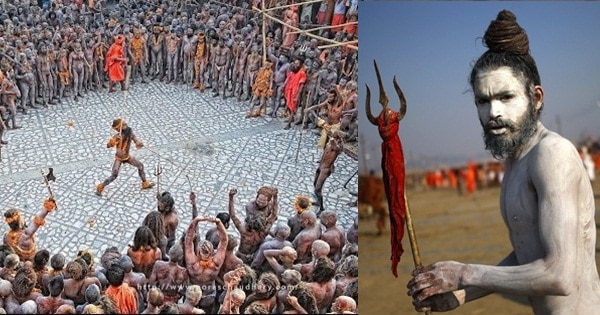 Who are Naga Sadhus?

Naga Sadhus are a particular group of Shaivite saints who reside in the Himalayan Caves and come to visit the civilization only during the Kumbh Mela. This is the only event when these ascetic saints can be seen amongst the general Indian population.

The Naga Sadhus have unique characteristic features drawing inspiration from the God Shiva. They hold tridents crowned with human skulls. Their bodies are smeared in thick ash and they wear heavy coils of matted hair on the head. These saints remain completely naked even during biting cold. They smoke Marijuana through a pipe called a Chillum or Shiv Muli. They use it as a tool to avoid the worldly distraction yet have self-control even in the intoxicated state. But as they advance in spiritual life they renounce intoxication too. The Naga Sadhus renounce the materialistic world and practice celibacy to escape from the cycle of birth and death and to attend salvation. As they belong to the Shaivite sect, they have matted locks of hair and their bodies are covered in ash like God Shiva.

The Naga Sadhus were founded by Dattatreya during ancient times such that the date of the foundation is lost. The ancient period was perhaps an age when humans never stressed the importance of time. Shankaracharya was the first one to organize the Nagas to protect Sanatan Dharma (Hinduism).

The place where the Naga Sadhus live is called ‘Akharas.’ The member of an ‘Akhara’ should always be ready for an intellectual fight and even for wrestling.

The Naga Sadhus – part of a mysterious and secret society – are worshippers of Lord Shiva. Nag means ‘naked’ and hence they are known as Nag Babas or Warrior-Ascetics. The rarely appear in public and the Kumbh Mela is one of those rare public events.

The Naga Babas are a warrior class and are divided like a regiment in an army. They have no fear of death and enraging them is a sure shot call for trouble. Their attributes are the trident, sword, stick, conch shells, other weapons and musical instruments which reflect their warrior status.

Naga Sadhus – often misunderstood by the western media as part of Indian religious gimmicks – are the epitome of renunciation. They hardly care whether they are misunderstood or called the naked holy men of India or ash-smeared and naked Hindu saints and walk unshaken on the path they have sworn for life.

According to a rediff.com article on Naga Sadhus by Prem Panicker, “The Dashanami Akharas — the 10 leading Akharas of Hinduism — can be broadly divided into the Shaivite and the Vaishnavite branches, with the Shaivite Akharas numbering seven while the other three profess the Vaishnavite belief.

The Shaivite Akharas are led by the intensely religious and scholarly Mahanirvani Akhara and the enormously well-funded Niranjani Akhara (which, in fact, have the first and second places in the bathing schedules that are drawn up at the Kumbh), but the real stars are the sadhus of the Juna (also known as Bhairav) Akhara. The Naga sadhus of the Juna Akhara are famed for their naked state, ash being the only covering they permit themselves. The other Saivite Akharas are the Anand, Atal, Awahan and Agni.

The Vaishnav (Bairagi) Akharas, believed to have been founded by Shri Balanandji Maharaj, are led by the Nirmohi Akhara, the Nirvani Akharav and the Digamber Akhara. All three have in course of time fragmented further, with the Nirmohi now boasting nine branches, the Nirvani (not to be confused with the Shaivite Mahanirvani Akhara) being further split into seven sub-branches and the Digamber being split into two.

Besides these two streams — Shaivite and Vaishnavite — that together comprise the Dashanami Akharas, there is also the Udasin Akhara, comprising of Sikhs who have converted to Hinduism, yet still venerate the Guru Granth Sahib as their chief religious text. The Udasin Akhara is further divided into two sub-branches. Also forming part of the honour roll of the leading Akharas is the Nirmal — more accurately the Nirmal Panchayati Akhara — who comprise of Sikhs who follow Guru Nanak and who have not converted to Hinduism.


Login with Email
No Account? Create One
Do you exist ?
My Spiritual Dairy – The Gayatri Mantra