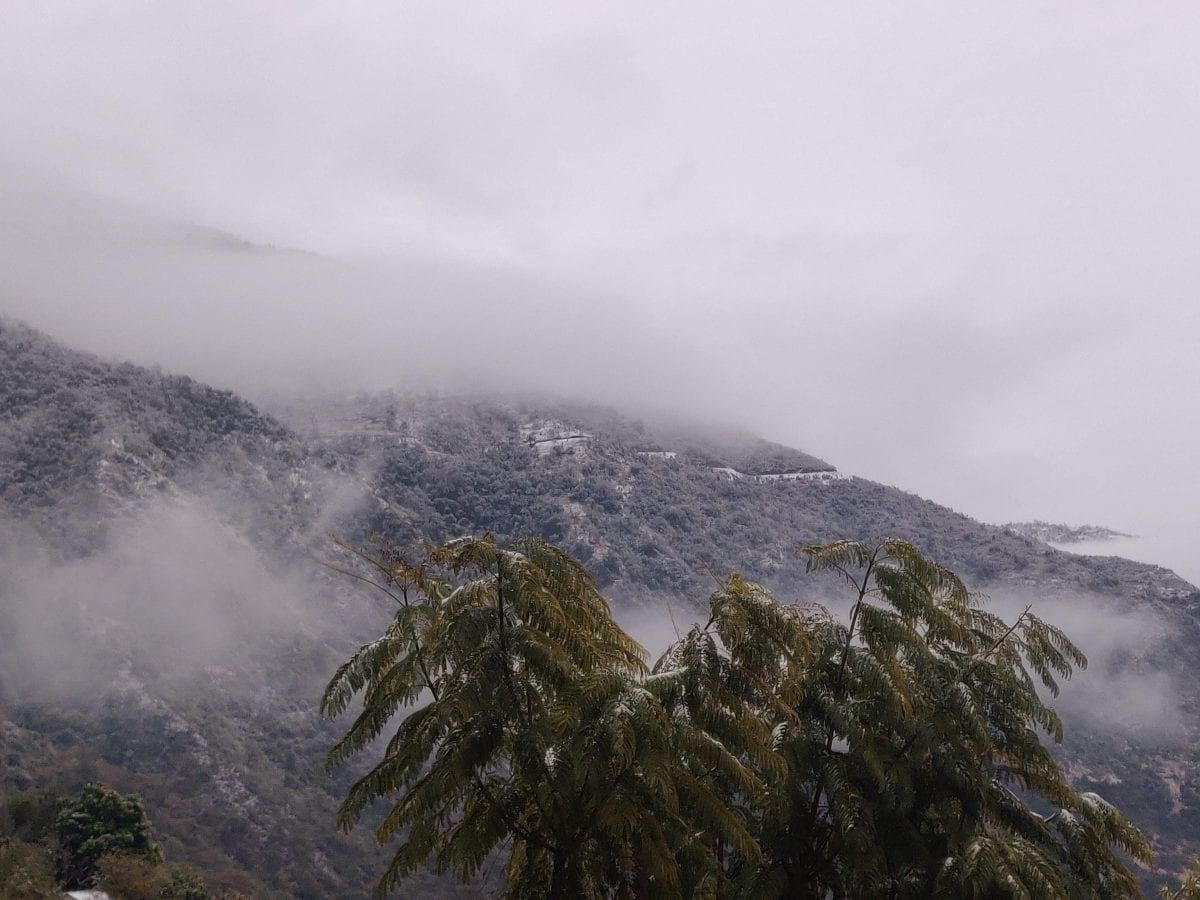 Part 5 in an ongoing series. The day the Divine made it snow :)

MANDATORY: Take a shot (of water or any other beverage of choice) every time you read the word, ‘snow’. 🙂

The end of 2019. Over the past few years, I’d made a game of guessing where I’d be at the end of each year and it was never ever where I thought it’d be. It was the same this time around too. Here I was, in the remote north, doing seva and preparing to live through my first winter season.

When this fact became clear, that I would indeed have to live through winter at the ashram, one of the first questions I went around asking everybody was, “Does it snow here?” Being from the south, seeing snowfall there is like seeing rasam in a North Indian meal. Both, a distant dream.

The uniform response I got was, “No, but we can see snow on the mountaintops at the beginning of January.” This was enough to create a sense of eager anticipation in me. I’d wanted to see snow for as long as I could remember.

I counted down the days to the new year impatiently, wishing I could rush through the end of the year. Come January 1, I began to wake up excitedly each morning and peer out onto the mountain tops first thing, dead sure that I’d find them glistening white. I’d feel a tinge of disappointment when I saw they were still brown.

Peak winter in the ashram is very, very cold, with the temperature mostly staying in the single digits. Everything from drinking water to cars becomes icy. On one such morning, I stepped out to work. Clad in four layers, a muffler and a monkey cap, I quite resembled Joey in F.R.I.E.N.D.S wearing everything Chandler owned. Below is a screen grab for your reference 🙂

While Joey looks adorable, I did not. I was in fact feeling a little mutinous and sulky that day. It was January 7 already and there was no sign of this snowfall that I had been promised. To top it off, I was feeling weighed down by all the layers. Gone was the grace and poise I’d developed as a dancer. In its place was a duck, waddling around.

Feeling quite let down and moody, I walked around in a gloom all day. Upon questioning one of the ashram residents as to why it hadn’t snowed yet, she responded, “I don’t know, it’s quite strange. Normally, we can see snow by this time. Maybe it won’t snow this year.”

This brought my hopes down further. In my mind, seeing snowfall was to have been the reward for surviving my first winter in the north. And now, it was being taken away.

I walked into the dining hall for dinner, ruminating on how unfair the Divine was being. All I wanted was some snow! How difficult was that for Providence to arrange?

“I was promised, Swamiji! Everybody said it would snow. You HAVE to make it snow.” I sulked my way through the rest of the evening, leaving no stone unturned in negotiating with Him.

“If You think about it, it’s really just ice that falls from the sky. And You have ice in Your freezer at home. Can’t you just make that come down from the sky?”

“I’m from the south! You know it doesn’t even get cold down there, much less snow. Who knows if I’ll get a chance like this again! Do You really want me to feel sad just because it didn’t snow?”

“Everybody says it happens every year! What’s so special about this year that it can’t snow? Don’t be mean, Swamiji!”

I’ll leave the rest to your imagination 🙂 Suffice it to say that an unhappy little child went to bed that night. I woke up the next morning and looked out, hoping against hope that my whining and praying had borne fruit. But alas. The mountains remained as brown as ever. If anything, they’d become dark brown instead.

I heaved a big sigh internally and got ready for the day. Maybe I’d get to see snow next year. Or if I was extra good for the rest of the week, maybe it would still snow.

I spent the morning talking to Kamlesh ji, one of the gardeners, as he worked. Gentle and soft-spoken, he’s taught me many things through his conduct, including patience and steadfastness. I often tease that with his handsome countenance, he could have been a Bollywood hero. He always blushes and laughs, his beautiful brown eyes darting away shyly.

It was all the encouragement I needed, and I began narrating at once my tale of woe at not seeing snow and how unlucky I was. He listened, amused, a smile growing on his face. “Chinta mat kariye, Ma’am ji. Kya pata, ho bhi sakta hai.” (Don’t worry, Ma’am. Who knows, it could still happen.)

I went up to my room after lunch, unable to stay outside. It was unbearably cold and all I wanted to do was snuggle under the covers and stay that way. Eyes growing heavy, I was nearly dozing when suddenly, the phone rang. Groaning, I snuck a hand out, pulled it towards me and answered.

I sat up with a gasp, wide awake. Throwing back the covers, I ran outside to look up at the sky. The mountains were almost completely covered in clouds and it was raining, gorgeous little drops of water hitting the ground.

And right in their midst were little droplets of ice falling from the sky.

Laughing and squealing, I looked down to where Kamlesh ji was standing and watching me, a big grin on his face. He beckoned me down and I ran, not realizing till much later that I had on no jacket, no cap, no gloves and no umbrella. All I wanted was to feel the snow on my face.

As I stepped out into the rain, tiny shards pelted me, falling onto my hair, into my hands, surrounding me with their iciness so cold, it felt like fire. Nothing had ever felt more beautiful.

I looked up at the sky and even as I watched, the ice melted into snow as it fell, real, white, fluffy snow that I caught with my tongue and let slide down my face. Over the next two hours, it continued to fall, turning everything around us into a fairyland of white and magic.

Swamiji had made it snow.

And since pictures speak a thousand words, let me save you some time –

I bumped into one of the ashram residents that evening and blurted out the whole story excitedly, of how I had prayed and prayed for snow, and how Swamiji had made it happen.

“Oh! So, you are the one responsible for this mess. Everything’s so slippery and cold!” she said, making a face. “Thanks a lot.”

I burst out laughing. One person’s joy was another person’s misery indeed. And what joy it was that day, almost delirious in its feeling, as I reveled and danced and basked in the love of the Divine. When I woke up the next morning, every single mountain top on all four sides, as far as my eye could see, was covered in white, glistening, twinkling and laughing right alongside me.

Was I so delusional as to believe that I had asked for snow and the Divine had granted it?

SURRENDER
It is impossible
to know of
this feeling that arises;
the one which tells me
You are the One.

You can lead me –
this soul who is
nothing but impure;
not worthy
of being the dust under
Your sublime feet
which Grace the planet,
the home we have killed –
into a place where
Redemption can be
Reality.

Will You take me
as Yours?
And keep me
under Your wings,
where Home is.

Thank you for taking time out to read Part 5. I am very grateful!