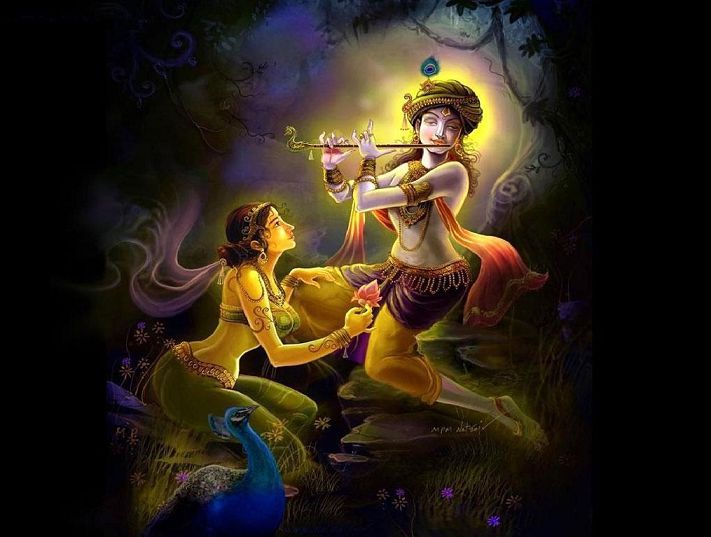 Learn about the nine forms of devotion that make one "divine."

Devotion (bhakti) may seem like a complex topic to many people, mainly because different people preach different kinds of devotion in the process of attaining liberation (moksha).

So what is devotion exactly? Let’s look at devotion in a Vedic way.

The Sanskrit word “Bhakti” is derived from the seed word “bhaj,” which roughly translates to love and dedication, which is precisely what devotion is.

The Shrimad Bhagavata Mahapurana describes “Nine forms of Devotion” (Navdha Bhakti) one can take up to merge with the divine.

The nine forms of devotion (highlighted in the Shloka) include:

A devotee has to go through these nine forms of devotion before becoming one with the divine. No path is any lesser than the other, all are equal, and one can even follow some of the paths if not all.

Just like all rivers merge into one ocean, all forms of devotion merge into one supreme consciousness, that is me, says Krishna in Shrimad Bhagavad Gita.

Let us understand each form of devotion and understand its relevance in your spiritual journey.

Hearing about the Divine (Shravan)

In our daily lives, we hear a lot of things. Some are positive and make us feel good, while some are negative that bring down our energy. This is because we’re mostly surrounded by people and, if not people, technology such as televisions or phones (particularly social media).

All such stimulus results in a confused mind constantly oscillating between happiness and sadness. This is why most people take up Vipassana meditation to control their senses.

At such a time, hearing about the divine, who’s the ocean of positivity, helps you focus your sensitive mind on supreme consciousness. This prevents your mind from wandering and helps build a direct connection to the divine.

Shravan can include listening to spiritual discourses, devotional songs, or mantras, including the seven-day Shrimad Bhagawat Katha or the Shiv Mahapurana Katha in Hinduism.

Chanting about the Divine (Kirtana)

Just like listening, we often say things that may be positive or negative for somebody else. In other words, most people rarely control their words.

Whatever comes to their mind first leaves their tongue first. This often results in hurting other beings, intentionally or unintentionally, which forms negative karma.

Chanting using your voice soothes your entire body, which is why Mantra Sadhana is always performed orally. When you chant about the divine, you cleanse your words, thoughts, and most importantly, your body, which is a product of sound (vibrations).

Kirtana can include singing devotional songs, playing musical instruments in a congregation, or even dancing to the songs of the divine.

The entire process of spirituality is targeted at purifying the mind. A purified mind results in a purified body, creating a happier society.

When you remember the divine, you naturally stop thinking negatively. Your thoughts turn pure, and you start living a fulfilled life even at times of misery.

Remembering the divine can include visualization of a deity, the beautiful stories of the divine, or acting divinely, knowing that “I am what I have been seeking.”

Serving the Lotus feet of the Divine (Pada-Sevana)

Serving the lotus feet of the divine makes you bow down and realize your true nature. This results in the shattering of the ego because you finally learn to bow down to the supreme consciousness irrespective of how powerful, rich, or beautiful you are.

Seeking ‘a bath in the dust of feet of holy souls who claim nothing as their own.’ (SBM VII.5:32)

This includes touching the feet of holy men or the physical embodiment of the divine. This also means serving all living beings to some extent since the divine resides in all creation.

Worshipping the divine is as much a physical act as it is a non-physical act. One can worship by heart, but even the body needs to be included in the process.

When building a relationship with the divine, you use both ways to express your love, just like in any relationship.

Worship does not mean you’re trying to please the divine; it simply means you love the divine enough to set aside some time to nurture your relationship.
Worshipping means traditional worship (pooja) or meditation (dhyaana), even Chanting and concentrating on the mantras (mantra sadhana).

Vandana includes salutation, bowing down, and being grateful for what has come your way. In this, you accept everyone and everything as divine and lay yourself at the divine feet, which is a sign of complete acceptance.

One can practice this prayer to show acceptance and be more grateful:

I asked for strength; the divine gave me difficulties to overcome.

I asked for wisdom; the divine gave me problems to solve.

I asked for prosperity; the divine gave me brain and brawl to work.

I asked for courage; the divine gave me dangers to overcome.

I asked for love; the divine gave me troubled people to help.

I received nothing — nothing that I wanted.

Silently, unknowingly, all my prayers were answered.

Practice this prayer whenever you feel incomplete or away from the divine. Remember what he is and what he has for you, and you’ll rekindle the devotion. With a fresh devotion, you’ll fall at his feet because everything you are, is him.

Serving the divine is the ultimate service since it is the only one where you don’t get to make a condition. In all other forms of service, you can set specific requirements such as time, pay, etc.

The divine service is the only service where you cannot place a condition but still receive much more than you need.

Serving the divine does not mean physically doing something that reflects your service. Physical service can be worship, as discussed earlier. Service means to wear an attitude at all times that “I am a part of you, but I’m not above you. You are the creator, and I am the creation.”

By this stage, you realize that the divine is not just your creator but also your friend. Devotees at this stage start talking to their deities like ordinary people. They start indulging deeper and deeper into their sadhana and start becoming like their deity (sarupya).

This is the strongest bond ever to exist because this is a bond the material world cannot break.

Consider the example of Prahalad, the great devotee of Lord Vishnu. Prahalad started seeing Lord Vishnu everywhere, in every aspect of his life. Even in the material world, everything that was physical started becoming his god for him.

Also, the Great Draupadi from Mahabharata. She was widely known as Krishna’s Sakhi (friend), and if you’ve read the epic, you know about the gambling that put Draupadi on the centre stage to be stripped. Even though Krishna protected Draupadi’s honour at the time, he also promised to bring a war nobody would have ever seen in yugas. It was when Krishna’s Sakhi cried that the war began. That’s how the friendship of the divine is.

This is Sakhya, to make the divine your Sakha (friend)

Offering Oneself to the Divine (Atma Nivedan)

A friendship without offering yourself to your friend isn’t a friendship at all. In Atma Nivedan, you offer your entirety to the divine with the trust you have in your friend. This is the last stage of devotion, and this is where all suffering comes to an end.

Once you become a part of the divine, you turn into an ocean from the tiny drop you are. This is because the full circle of birth and rebirth has come to an end, and you’ve finally merged with your source, the creator.

This is when Radha becomes Krishna and together, we call them “RadhaKrishna” because this name symbolizes the last step of devotion, atma nivedan.

Divinity is in all of us, whether we can see it or not. It’s our choice to either awaken it or suppress it. This choice is the difference between happiness and suffering.

The Land Of Culture, IN

Neither the body, nor the mind. I am the eternal soul, like you my friend!

You Are Already Liberated..
Kaffir, Lower Caste and Satan.