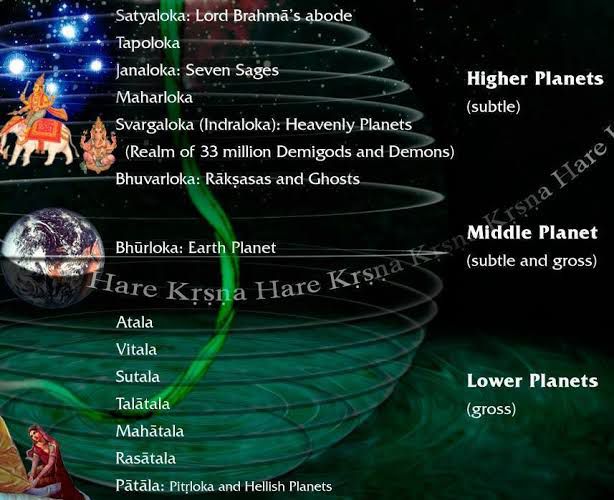 On The Way To Our Orginal Home (Part Three)

The Sky Beyond The Material Universe

If even the higher planets in this universe are subject to birth and death, why do great yogīs strive for elevation to them? Although they may have many mystic powers, these yogīs still have the tendency to want to enjoy the facilities of material life. On the higher planets, it is possible to live for incredibly long lifetimes. The time calculation on these planets is indicated by Śrī Kṛṣṇa:
sahasra-yuga-paryantam
ahar yad brahmaṇo viduḥ
rātriṁ yuga-sahasrāntāṁ
te ’ho-rātra-vido janāḥ
“By human calculation, a thousand ages taken together is the duration of Brahmā’s one day. And such also is the duration of his night.” (Gītā 8.17)

One yuga covers 4,300,000 years. This number multiplied by one thousand is calculated to be twelve hours of Brahmā on the planet Brahmaloka. Similarly, another twelve-hour period covers the night. Thirty such days equal a month, twelve months a year, and Brahmā lives for one hundred such years. Life on such a planet is indeed long, yet even after trillions of years, the inhabitants of Brahmaloka have to face death. Unless we go to the spiritual planets, there is no escape from death.
avyaktād vyaktayaḥ sarvāḥ
prabhavanty ahar-āgame
rātry-āgame pralīyante
tatraivāvyakta-saṁjñake
“When Brahmā’s day is manifest, this multitude of living entities comes into being, and at the arrival of Brahmā’s night, they are all annihilated.” (Gītā 8.18)

At the end of the day of Brahmā, all the lower planetary systems are covered with water, and the beings on them are annihilated. After this devastation and after the night of Brahmā passes, in the morning when Brahmā arises there is again creation, and all these beings come forth. Thus subjection to creation and destruction is the nature of the material world.
bhūta-grāmaḥ sa evāyaṁ
bhūtvā bhūtvā pralīyate
rātry-āgame ’vaśaḥ pārtha
prabhavaty ahar-āgame
“Again and again the day comes, and this host of beings is active; and again the night falls, O Pārtha, and they are helplessly dissolved.” (Gītā 8.19)

Although the living entities do not like devastation, that devastation will come and overflood the planets until all living beings on the planets stay merged in water throughout the night of Brahmā. But as day comes, the water gradually disappears.
paras tasmāt tu bhāvo ’nyo
’vyakto ’vyaktāt sanātanaḥ
yaḥ sa sarveṣu bhūteṣu
naśyatsu na vinaśyati
“Yet there is another nature, which is eternal and is transcendental to this manifested and unmanifested matter. It is supreme and is never annihilated. When all in this world is annihilated, that part remains as it is.” (Gītā 8.20)

We cannot calculate the extent of the material universe, but we have Vedic information that there are millions of universes within the entire creation, and beyond these material universes there is another sky, which is spiritual. There all the planets are eternal, and the lives of all the beings on them are eternal. In this verse the word bhāvaḥ means “nature,” and here another nature is indicated. In this world we have experience also of two natures. The living entity is spirit, and as long as he is within matter, matter is moving, and as soon as the living entity, the spiritual spark, is out of the body, the body is immovable. The spiritual nature is called Kṛṣṇa’s superior nature, and the material is called the inferior. Beyond this material nature there is a superior nature, which is totally spiritual. It is not possible to understand this by experimental knowledge. We can see millions and millions of stars through a telescope, but we cannot approach them. We have to understand our incapabilities. If we cannot understand the material universe by experimental knowledge, what is the possibility of understanding God and His kingdom? It is not possible experimentally. We have to understand by hearing the Bhagavad-gītā. We cannot understand who our father is by experimental knowledge; we have to hear the word of our mother and believe her. If we do not believe her, there is no way of knowing. Similarly, if we just stick to the Kṛṣṇa conscious method, all information about Kṛṣṇa and His kingdom will be revealed.
Paras tu bhāvaḥ means “superior nature,” and vyaktaḥ refers to what we see manifested. We can see that the material universe is manifested through the earth, sun, stars, and planets. And beyond this universe is another nature, an eternal nature. Avyaktāt sanātanaḥ. This material nature has a beginning and an end, but that spiritual nature is sanātanaḥ – eternal. It has neither beginning nor end. How is this possible? A cloud may pass over the sky, and it may appear to cover a great distance, but actually it is only a small speck covering an insignificant part of the whole sky. Because we are so small, if only a few hundred miles is covered by cloud, it appears that the whole sky is covered. Similarly, this whole material universe is like a small, insignificant cloud in the vast spiritual sky. It is encased by the mahat-tattva, matter. As a cloud has a beginning and an end, this material nature also has a beginning and an end. When the clouds disappear and the sky clears, we see everything as it is. Similarly, the body is like a cloud passing over the spirit soul. It stays for some time, gives some by-products, dwindles, and then vanishes. Any kind of material phenomenon that we observe is subject to these six transformations of material nature – it comes into being, grows, stays for a while, produces some by-products, dwindles, and then vanishes. Kṛṣṇa indicates that beyond this changing, cloudlike nature there is a spiritual nature, which is eternal. In addition, when this material nature is annihilated, that avyaktāt sanātanaḥ will remain.

My Inner Immunity
The Thin Line Between Persuasion and Coercion…