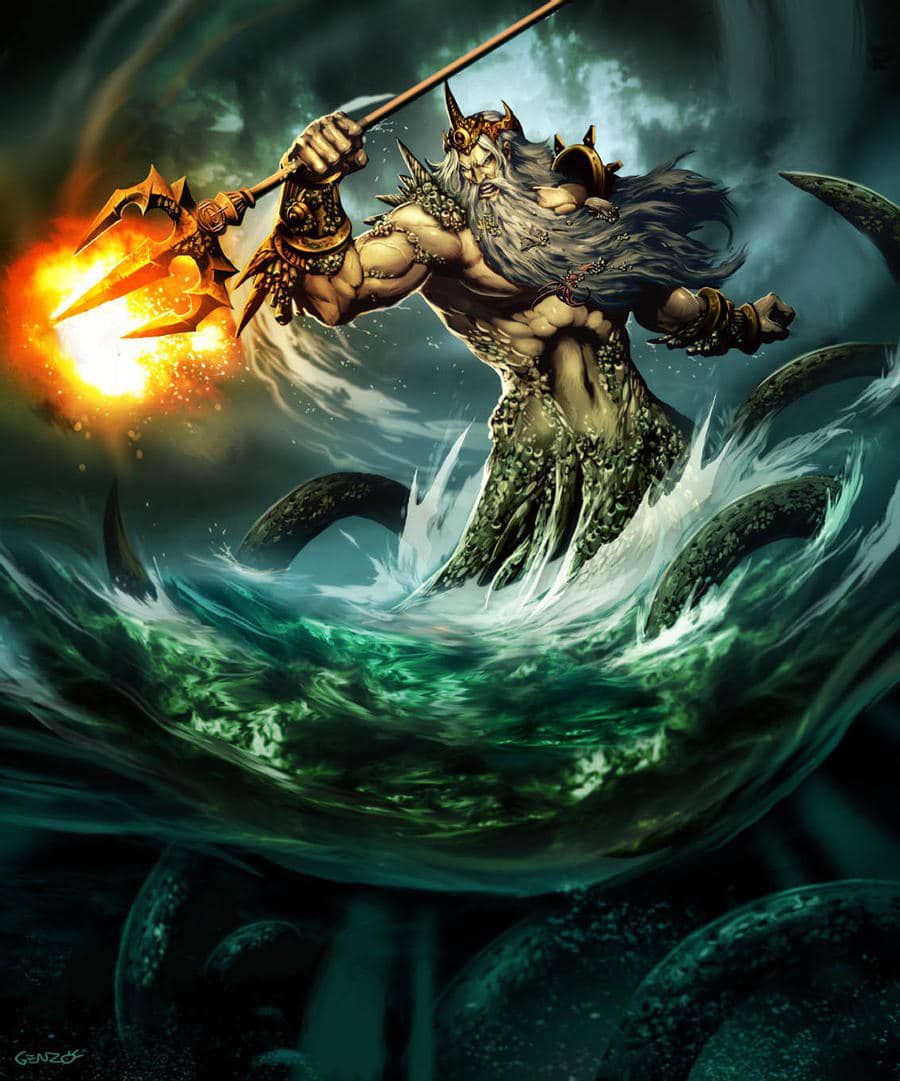 When you gotta fight, you fight Poseidon style!

Zooming at insane speed in the water, Poseidon, king of the ocean was carefully fish eyeing for the demon king: Mega Three Headed Elemental Dragon. Poseidon was a buff, glossy merman who had lived for more than a billion years protecting all the oceans. His hair was blue, his beard was white and his eyes were on fire. His skin was made of scales. His main body had golden scales and his tail had blue and purple ones. His arms had titanium fins which could cut through an army of sharks with one pinky push. He was made of water but was stronger than titanium. His weapon, the mighty Golden Trident was secured on his forehead as a black gem while he swam at blasting speed across the oceans.

On that blood moon night, it was hailing thunderously, the coral reef was shining like knife edges, the volcanos were exploding ferociously and obliterating everything in their path. Meanwhile, the killer sharks were thirsty for bloodshed! The three-headed elemental dragon was absorbing the energy of the blood moon to conquer the oceans. He desired to devour every animal in the ocean and make all the mermaids and mermen slaves of his evil empire.

While Poseidon was searching for the dragon, he spotted some spray paint and remembered how the dragon’s slaves dressed. So, he decided to disguise himself as one of the slaves. After dressing up, he continued his search. He spotted a cave inside the coral reef. That cave had words from the dark world written all over the entrance. He took out the gem from his forehead and unleashed the trident with his smouldering intensity. He instantly teleported himself into the evil empire fortress right in front of his psychopathic enemy. The dragon, upon seeing Poseidon, reacted with one of his heads screeching, another screaming and the other insulting Poseidon! Immediately the two rivals were charging towards each other. Poseidon, held the trident with one hand and made a Chidori (lightening hand) with his other hand. He then swam furiously towards the dragon as water bubbled violently around him. The dragon flew with his wings in the water, with one head forming a fire ball, the other head forming an air ball (Poseidon cannot breathe in air unless he transforms into his human form) and the middle head into a lightening ball! Poseidon stabbed the middle head of the dragon with his trident, then sliding under its body, Poseidon, Chidoried the dragon’s weak spot and executed it, right there.

Five seconds before the dragon died, Poseidon absorbed the dragons’ soul and abilities. He distributed the powers to the mermaids and mermen. He then went on to offer the dragon’s soul to his Guru and requested him to purify it. The Guru purified the soul and gave it back to Poseidon. Then, Poseidon did something very smart. He took the soul and placed it inside the right-hand man of the dragon and made him his new right hand man because he didn’t have one in first place!

Please comment and follow me on osdotme to be a part of the amazing adventures of my brain.

I read all the cool comments that you all posted for my first post but cannot reply yet from my account. I’ll use my mom’s to reply. My mom has promised to buy me a membership after I write 5 posts.

A big shout out to Komal for editing my story:)

9 year old rockstar, anime fan, an amazing artist and a story writer! Personal quote about myself: " You wouldn't be living your life to the fullest without me!"