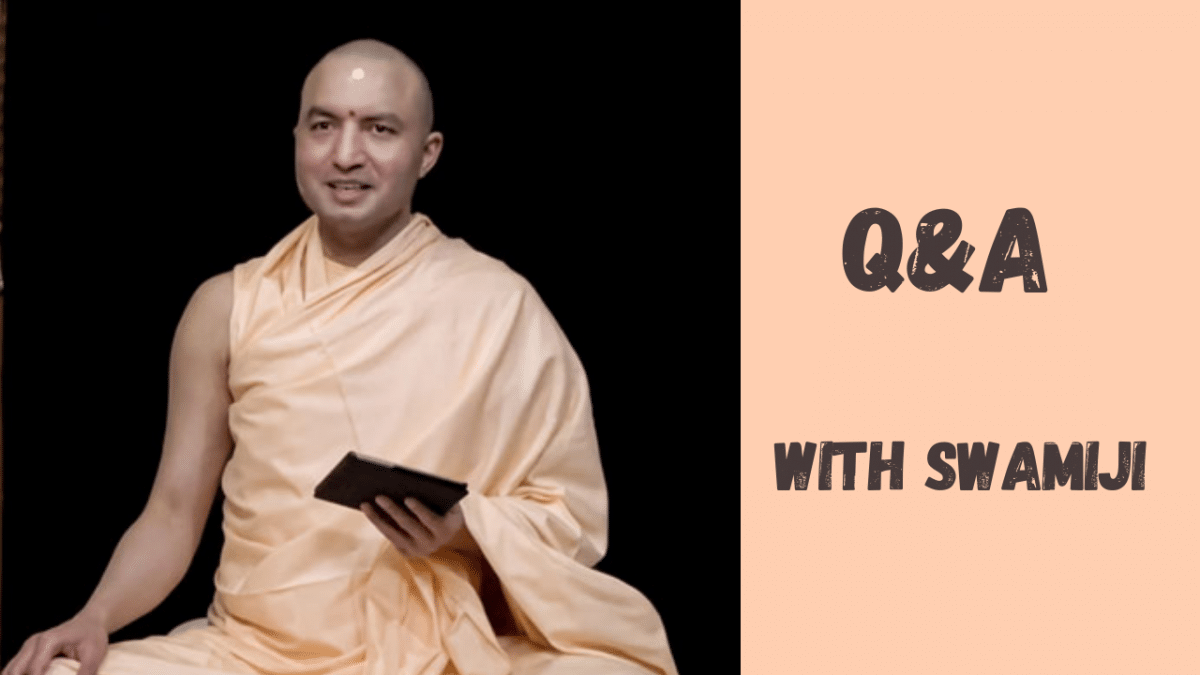 A Revision of Swamiji's Teachings

Q. How does God manifest His form before His devotee?

Ans. I would like to give you an example of the most fundamental requirement of Devotional Service : Just envisage a small child – a toddler who’s playing at home. And next to him, in the kitchen, his mother is working. She’s busy cooking. The child starts to cry. He’s too young to explain properly. So, he cannot really explain his needs. But clearly he wants his mother (generally speaking) and he starts to cry. The child isn’t crying out too loud. The mother is going to watch for a few minutes, before she leaves everything that she’s doing and goes and sees that child. She’s just going to listen to the crying of the child. If the toddler keeps on crying, a couple of minutes later, the mother is going to go up to the toddler and probably – either console him, or, give him a pacifier. Often the child is going to start sucking on the pacifier, and be quiet very soon. If that doesn’t happen, the mother thinks, “Maybe my child is hungry”. She may, at that point in time, give him a bottle of milk, or something to eat (maybe a biscuit or something). If the child goes quiet, all is hunky-dory. (But) if the child doesn’t go quiet, and keeps calling out for the mother, she then goes back to the child, and tries to ascertain if the child is cranky or grumpy because of some problem. She’s going to make sure everything’s okay, he’s not hurt anywhere, once that’s done, maybe she’s going to turn on the TV for him (to watch some cartoon), or maybe give him some stuff to play with. If the child goes quiet, the mother resumes her work, and let the child be busy. However, if in spite of all these, if the child continues to cry, then the mother doesn’t even take a moment, and she drops everything! And she comes running to the child and picks him up in her arms. Can you guess what am I getting at? This is what happens with a devotee.

When a devotee becomes desperate for the deity, for his God, when he is no longer interested in anything that his God may bestow upon him – it could be pleasures of the world, it could be material gains, it could be name, fame, wealth, you name it, if the devotee keeps on rejecting all those one after the other, there comes a time when Nature or God, in this case, certainly the Deity (the specific form you are worshipping), thinks to Himself, “This is a genuine devotee. Therefore, I must manifest my form before my devotee, because my devotee doesn’t want anything now”. The child only wants the mother now. So, the Cosmic Mother or the Divine Mother or Krishna, any name you want to give, doesn’t take a moment then. He does not take very long, at all!

Imagine you go to a shopping mall, and you have your son with you, and he goes missing! He’s looking for you and he’s crying really loud. And, people around him try to lure him, try to pacify him, but all attempts fail. At that point in time, your child is only thinking about you – the mother. He is not thinking about anything else – No chocolates, no candies, no balloons, no games, nothing! Only You. Look at that concentration for a moment! Look at that desperation! Look at that longing, that craving, that wanting the mother.

When you as a devotee become that crazy for your God, your God is going to manifest His form in front of your eyes! And I would like to say something here which, in my mind, is very important – All these things that I am saying are not based on any bookish knowledge. This is my “First-Hand Experience”, My direct experience. And you can experience it as well.

If you are willing to be the devotee, if you can cry out for your Lord, if you can think about Him, sing His glories, and talk only about Him, read about Him and seek His refuge and “only His” refuge, and when you have that firm conviction that “He is going to be your soul saviour” – not this world, nobody in this world, nobody that you know, except Him, that Devotion is going to transform you in a way that is unimaginable, in a way that is inexplicable. I cannot explain it, I cannot put it into words, it is indescribable, but IT IS POSSIBLE! And I have experienced it, and you can too! All you have to do is – Become a pure devotee.