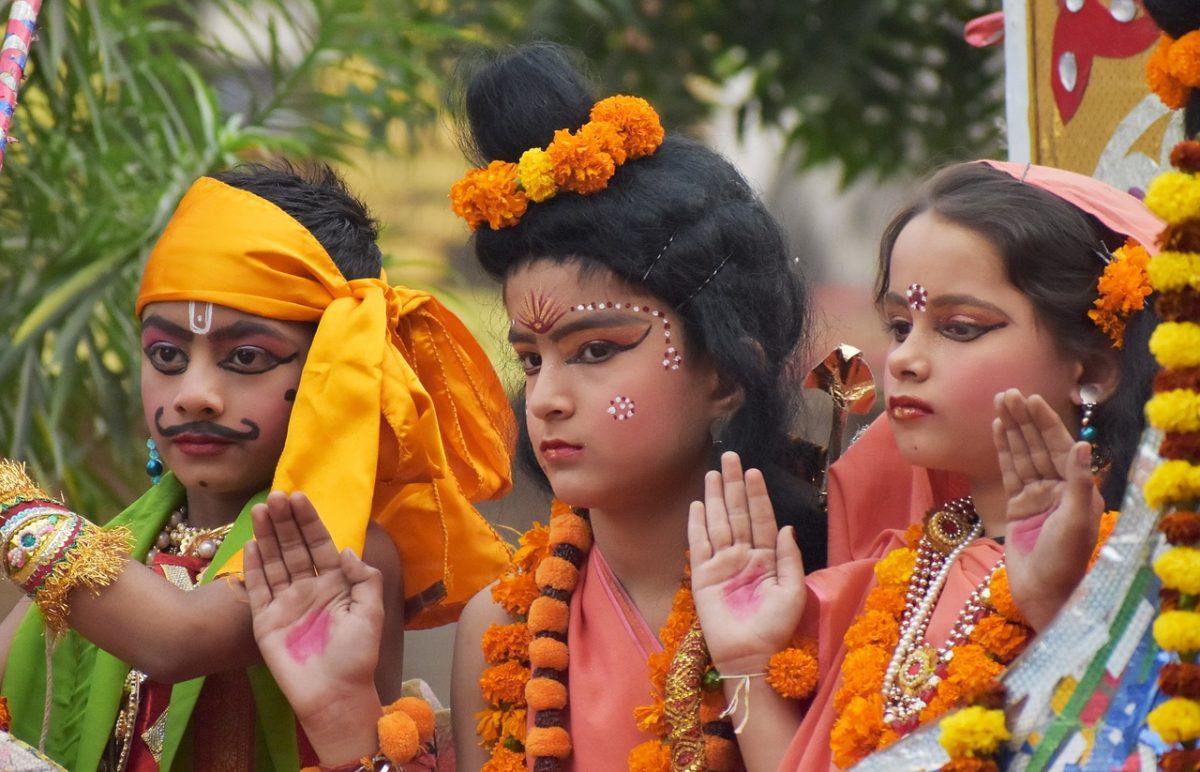 This story dates back to when i was in 4th/5th class.

It’s school time and our class is going on, mam is writing on the black board and the students are copying. Another mam enters the class and calls me and Akshay, my friend, then she proceeds to take us to the staff room; meanwhile while walking up to the staff room, we were little scared because she took us in the middle of the period. On reaching the staff room, we were finally relieved to hear that mam called us to inform that we have been selected for the Ram Leela which was going to take place in a few days.

Luckily i was selected as a Vanara and my friend was told to be a part of Ravan Sena. All in all there were only 10 members in this Ram Leela –

Yes, only 10 members were there, no Hanuman ji, no Vibhishana, no Meghanada, no Kumbhkarana.

This Ram Leela was unlike any other as it was based around ‘no dialogue, only action’. Yep, not a single dialogue.(I don’t know the genius who planned it like this, yet it was worth in the end 😂)

So the D-day came, everyone was getting ready for the action. The Vanaras were dressed in short orange dhoti and the Ravan Sena members were given black pants to wear, and both the groups were told to be naked from waist up. Now, mam took a lipstick and wrote जय श्री राम on the chest of Vanaras. I do not adequately remember what Ravan Sena members were marked on their face/chest. I was feeling on top of the world, it was like now i had Ram naam with me, i will fight bravely with Ravan Sena members and defeat them. A wooden scale was handed to each of the members of the 2 groups as a weapon. Meanwhile, special costumes, ornaments, the crown etc were arranged for the main cast of the Ram Leela.

There was a request from my friend, Akshay from Ravan Sena who was little scared, actually we had an agreement that we will fight with each other in the Ram Leela(as we didn’t knew other members); he told me to be gentle while fighting with the scale. I was like, i will try my best not to beat you😂.

So now we were ready to perform and proceeded towards the stage for our starting position. The stage had 2 entrances, one from the right; where Shri Ram and his warriors were standing and one from the left where Ravan Sena members took place. Ravan, holding Maa Sita captive stood at the center of the stage.

Action, the teacher said and there we started; led by Shri Laxman(played by my friend from the same class; though owing to his big frame, he would have been more befitting for the role of Kumbhkarana 🤣), we charged into the stage turned battlefield chanting जय श्री राम on top of our lungs and attacked the Ravan Sena. As per our agreement,me and my friend started fighting each other, now in excitement, i attacked with greater force on his weapon(scale) and his grip loosened on the scale.  I was eager to fight more as it was the first time i was doing talwarbazi(fencing). Seeing his grip loosening, i attacked another time, thereby beating him on his hand in the process. He was scared and whispered,’Tu to bahut zor se maar raha hai😂'(you are beating me with greater force). I was like, now i will beat you some more 😂😛, as i was about to attack him the third time, he dropped his scale and ran away to the left side of the stage and so did the other 2 members of the Ravan Sena, thereby signifying our triumph.

Now,everyone was eagerly awaiting the battle between Shri Ram and Ravan as they had been given special weapons like Sword, Bow and Arrow etc. The Vanara Sena was standing little bit away from the Ravan, and Shri Laxman, after leading us to the victory was standing at the center of the stage near Raavan and Maa Sita, Raavan was ready for the battle and was facing Shri Ram(standing at the right side of the stage), we were cheering for Shri Ram to shoot the arrow at Ravan and rescue Maa Sita.

Meanwhile, Shri Laxman had some other ideas about how the final battle should end. Clearly not content with his role; and before Shri Ram could hit lankadhish with the arrow, Shri Laxman with an impulse, hit his weapon in Ravan’s stomach 🤦‍♂️😂 and Ravan too impulsively fell down as if he was defeated and killed. 😂😂

Waves of laughter followed from all over the place following this impromptu act of Shri Laxman and Ravan(the teacher who prepared us might have facepalmed too 🤦‍♀️). The only people that might have been left sad were the main characters of the Ram Leela: the students playing the role of Maa Sita and Shri Ram. Imagine getting ready with special dresses, ornaments, crown etc and not able to play your role because Shri Laxman(my friend) single-handedly ended everything. 😂😂

These are the details that i remember from the funniest and the only Ram Leela i have taken part in my life. I hope you enjoyed reading this anecdote. 🙏🙂🙂