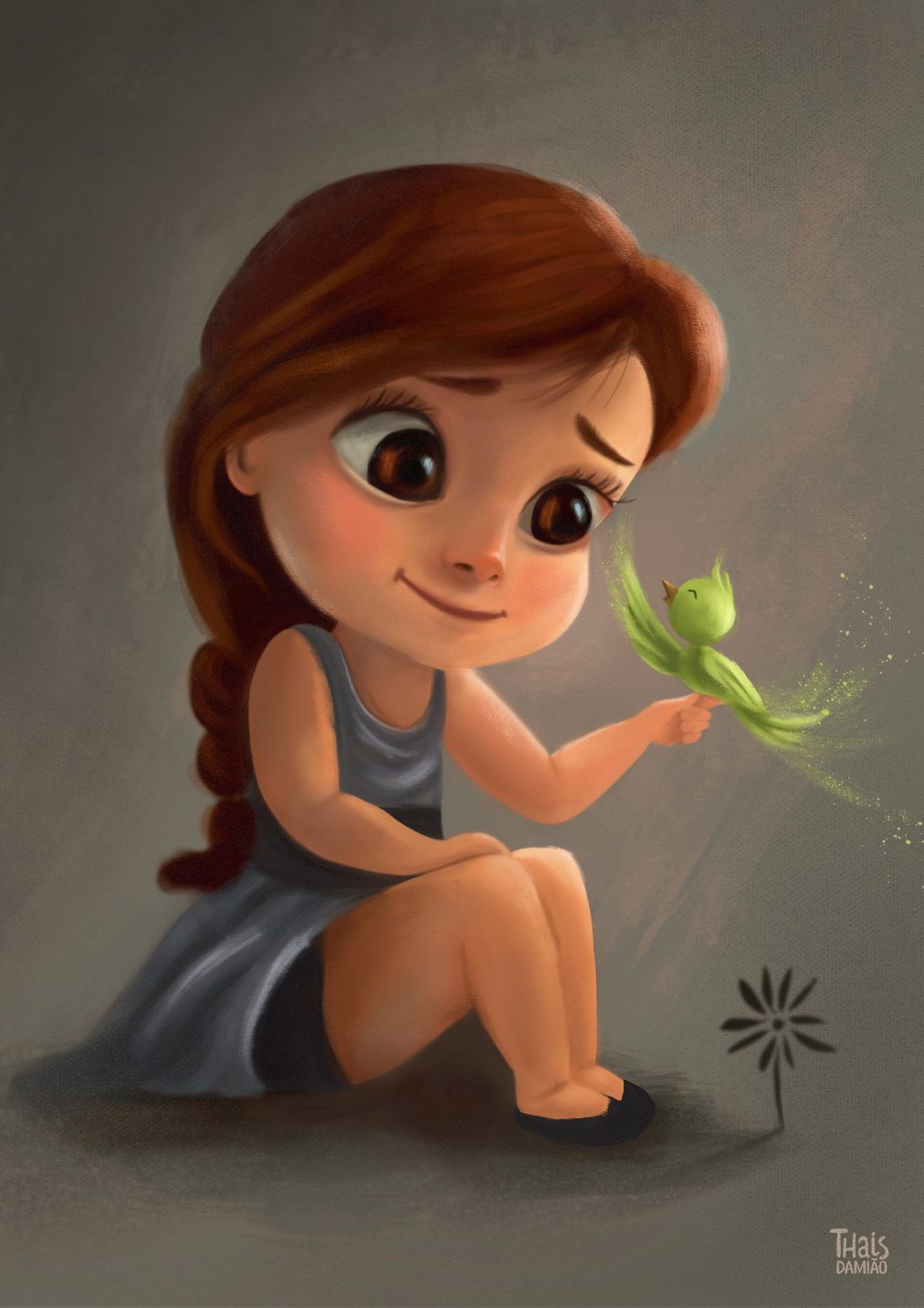 It was a cold winter morning. Rani tried to wrap the blanket more tightly around herself. She didn’t want to get up. But her mother was calling her, “Rani, get up and wash your face. And run down to the shop. Papa finds it difficult without help.” Rani reluctantly got up, sat on her bed and rubbed her eyes. Then she suddenly remembered about the beautiful frock her mother had brought yesterday. It was a light blue colour with a satin ribbon bow and lots of lace. “Mother, can I wear that blue frock ?” “What if you drop tea on it? You can wear it next week for Diwali. We need not buy a new dress for you this Diwali.”

Her mother worked as a domestic help at Gupta sahab’s house. And memsahab had given her their daughter Anjali’s old frock when she had outgrown it. The frock had a few tiny stains on it, but it hardly mattered to Rani. She was very excited to become the proud owner of this lovely dress. She felt a little disappointed that she couldn’t wear it today. But never mind. She washed her face in the cold water and rinsed her mouth and wore her faded brown sweater over her frock. The sweater had a big hole in the front and quite a few tiny ones on the back which were slowly growing bigger. Her mother had promised to get a new sweater for her by next winter. Till then she had to manage with this sweater. But the holes didn’t matter, as she would stand close to the stove at her father’s tea shop, while doing her work which was to pour out the warm adrak waali chai, and serve it to the customers. She skipped off to help her father at their little tea- shop. The customers had already started coming. Lots of early morning office-goers dropped into her father’s little tea- shop where he served mainly hot pooris with aloo sabzi and kachoris. People dropped in to have a little snack and a cup of chai before going to work. Rani was happily pouring out the cups of chai, then she heard a voice calling out to her, “Rani, Rani…” She looked across the road, and she saw Anjali dressed up smartly in her school uniform with pullover, waving at her. She waved back. Anjali called out, “You will come today na…I have got a new Barbie doll…we will play doll party today.” “Yes, I will come. ”, called out Rani. Rani accompanied her mother when she went to work at the Gupta’s house as Rani had a little brother who had to be taken care of. And while her mother worked, Rani looked after the little fellow. And when he slept, she played with Anjali. Anjali was very fond of Rani, as Rani would always obey her and play by her rules. Rani liked to please Anjali, who would in turn let her play with her toys. Rani would also sometimes look through Anjali’s books. She had a cupboard full of storybooks. Sometimes they would look through the pictures in these books and Anjali would become the princess in the story, and Rani her maid. Rani also liked to look at Anjali’s school books. She wanted to go to school herself. But her father didn’t let her, telling her that school is not for girls. She was anyway destined to work in someone’s house, of what use was going to school for her? Besides he had to save that money so that her brother would be able to attend school when he grew older. So she would try to attend Chandini didi’s classes in the evening. Chandini didi taught them alphabets and simple maths on some evenings. Rani dreamed that someday she would be a teacher like Chandini didi and teach poor little kids in the slum.

A week went by, it was Diwali. Rani’s mother had so much work to do besides taking care of Rani’s little brother. And this year, expenses had been much more, with Rani’s little brother coming, so there were no sweets for Rani. At least she had a beautiful dress to wear, she thought cheerfully. Anjali had asked Rani to come to their house in the evening to light the Diwali crackers. Rani’s parents didn’t have money to buy any crackers for her, so her mother agreed to let her go to Anjali’s house. Rani dressed up in her lovely blue frock went to Anjali’s house. Anjali was very excited. Diwali was her favorite festival. There was so much to do. She started lighting the crackers. she called out to Rani to come with her, but Rani didnt want the sparks falling on her beautiful frock, so she stood far away and watched Anjali. Anjali was wearing a beautiful colourful long skirt. As Rani watched, she suddenly realised that Anjali was in danger. Anjali had her back turned to an “anar” which she had thought wasnt working. And it had started to light up. And she didnt hear Rani calling out to her in all the noise around her. Rani made a dash and tried to push away Anjali. Both of them fell down. As the anar lighted up, a few sparks fell on Rani’s dress, and burnt black holes into it. But Anjali was safe. Anjali’s mother came running up to them. “ Anjali, are you hurt?” Seeing that Anjali was only stunned, but unharmed, she turned to Rani, who was examining the holes in her frock. “ Thank you so much for acting so quickly. I am so sorry about the dress” “Koi baat nahi, Memsahab.” “ Tell me, what reward do you want for being such a brave girl. I will get you a new dress.” “I was only doing what anyone else in my place woud have done. Thank you memsahab, but i dont want anything. “ And she smiled a bright smile.

Next day, when Rani accompanied her mother to Anjali’s house, she was in for a surprise. Gupta sahab came and talked to her mother. He asked her which school she was going to. When he heard that she wasn’t going to school he said, “I will always be grateful to you for saving my daughter from harm. I want to reward you for this brave act by sending you to school. You are a smart little girl, who has much to give to this world.” Rani couldn’t believe what she heard. As she snuggled closed to her mother that night, she smiled in her sleep… What had been only her dream so far was coming true…she was going to school…!!!