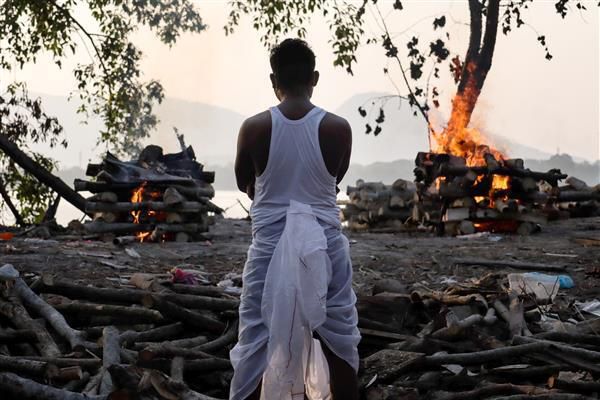 Sitting by the River I Found

More than a year ago, I was living in Haldwani, with my mom, with little contacts with my father(then estranged). I was suffering from paranoia, acute anxiety and all kinds of mental disturbances. And by this time owing to my instability of mind,  I had already lost my opportunity to prepare for CAT, the entrance test for getting admission into premier business schools. So, I got admitted into a private college in Dehradun instead.

My maternal grandfather, or nana(in Hindi) was very close to me. I loved to be in his company to talk about various aspects of life and living. He was a fine man; refined in his thought, coming from a background in forest service in government of Uttarakhand. But two years ago, in September he died out of several complexities.

A tear trickled from one of my eyelids when I saw his body lying in a vegetative condition, bear by life supporting machines all around his body. That morning, first time in my life, I came to observe the rites and rituals of death being carried out by my family members. Women had gathered with my nani(maternal grandmother), to mourn of the death of my nana. People were flocking in and out, and there he laid, covered by a white sheet.

Soon, Mama(maternal uncle) had arrived and by the rules of rite, he had to remove clothes from nana’s body and I think he’d to apply oil on his naked body. Then, we offered flowers to his body and the rites were began by the pandit ji.  Later, a vehicle was brought to carry his body to the crematorium along with the few men(family and some other close people) who’d to accompany Mama to the crematorium to burn the body. I also went along.

And then, I think, first time in my life, I went to a crematorium. It was a shamshaan ghat(crematorium by a riverbank). The river that flows there is the Goula river. And I witnessed the whole process of a man’s body turning down to sheer ashes and nothing else. I was one of the last to leave. I stayed there with Mama.

Then the next thirteen days of abstinence were carried out , believed to be the period of mourning, when the soul doesn’t leave but tries to come back to its body. I believed nana was still there as a atma(soul), still hovering somewhere around the house. And believe it or not, a certain small incident happened with me after his death. A few hours or days (I do not remember correctly), I heard a male voice calling out to me. “Golu jara idhar ana(come here Golu)”, the voice said.

What I realized though, was that there was no male person sitting in anyway near to me, or at some distance also. Besides no one there called me Golu except nani and mummy. Everyone called me Nalin. I concluded, perhaps wrongly, that it was nana who was calling me.

Anyway, after my nana’s death and after my visit to the crematorium, I got inclined towards visiting the crematorium again. Next year I went to that shamshaan ghat again, this time to do an astrological remedy. I then sat by the river for some time and it felt peaceful.

But my life still had so many problems, and still my mind would not let me be at peace. I was still paranoid, anxious and what not. So, one day I decided I would go to the shamshaan ghat ‘gain and promised myself that I would shed off all my problems from my mind there, give it in the hands and care of my Bhagwaan and would come back empty and peaceful, without the burden I kept carrying.

And the image of an elephant sitting on the branch of a tree, reminds me of this time when I meditated for the first time in a shamshaan ghat.

So, I went to the shamshan ghat, and I meditated over there sitting on a big rock, with the sound of gentle murmuring river all around. I meditated on that sound. People were looking at me but I gave them no priority. I just meditated. And that was such a nice experience. I opened up my eyes. Sitting there, I saw that just some yards to my right, bodies were burning, pressed beneath the firewood and fire was consuming them without any remnants. The river was flowing gently as ever, and as far as my eyes could see I could only see fire burning beside the river.

Seeing this view, made me serene and got me into a philosophical disposition. Awe-stuck, I was churning out philosophy of life. I could understand the transient nature of life, and as they say when people go to a crematorium they become detached(although temporarily), I also became detached. Sitting by the river, I found life as a flowing river where we as individuals are nothing but individual logs of wood(or drops of water) floating on the river. We go through a series of births and deaths like those burning bodies put adjacently by the side of the river, and our final destination is beyond birth, beyond death, beyond the view of burning bodies in the shamshaan ghat- the place we call as moksha or the place of no return into this world’s cycle of birth and decay.

I sat there for some time. And, with that peaceful mindset, I climbed back the stairs and before leaving the river, I made a resolve, to my Bhagwaan, that from that very same day onwards, I will leave all my mental suffering behind and come out a stronger man. It took me another one year to successfully carry out that resolve but today I can confidently say I am finally at peace, joyful and content because, finally, deep in my heart, I have realized- “Jahi Vidhi Rakhe Ram Tahi Vidhi Rahiye” (live the way God wants you to live).

The Exploding Frog
The Elephant in Me