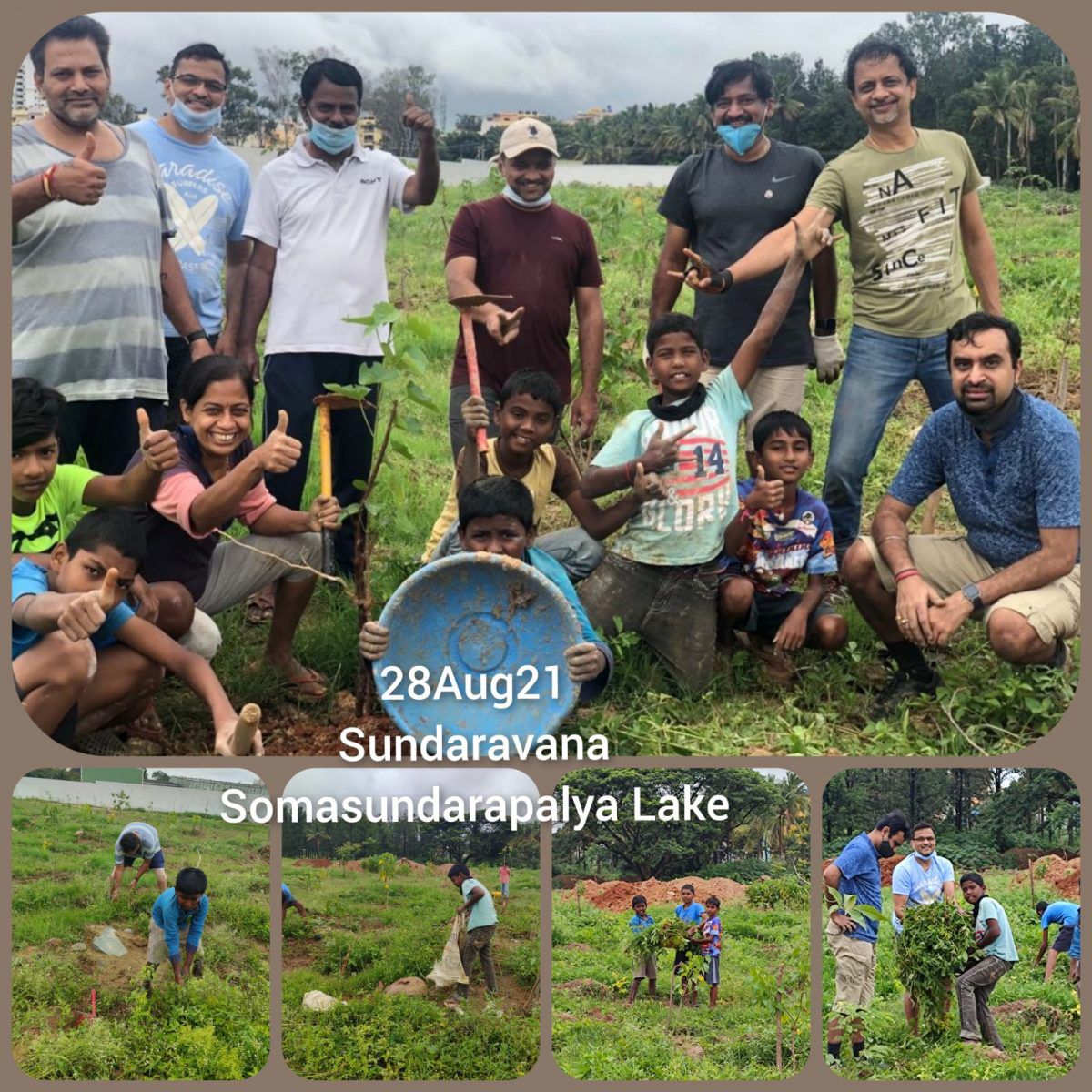 Four years back when I moved to the locality where I stay now, the place that I am writing about was just a mountain of junk. It was located behind a lake which was just a mess of black sewage mixed with water, the place was detestable—an outcome of human callousness. Even though our area is residential in nature, the lake and its adjoining land had been abused for a considerable period of time. The eye chooses to avoid things it doesn’t like and this was the case with this mountainous heap of junk and plastic. I hardly ever noticed it.

But humans have the ability to create both messes and beauty. It’s a choice and a strong vision which drives how we shape up things.

I used to think several times while passing by the Somasundarapalya Lake of how wonderful it would be if the lake were to be restored. I guess, there must have been several like me. I was pleasantly surprised when I noticed one day that work had started to drain out the lake. It was a great initiative by the government. Over time, the lake was completely emptied to reveal a lower layer of wastes. These were dug up and fresh soil was brought in to restore the lake bed. During the rains, the lake filled up again. I’m still amazed at how life came back in the lake—I mean, water plants, fish and ducks. Considering that everything was reduced to just soil, I wonder how birds and fish came there. Nature is miraculous!

I sometimes take a walk around the lake,alone or with someone from my family, on a pathway that has now been created. Some people are back to their old ways—dumping garbage, throwing plastic, littering, allowing their dogs to poop and so on and are creating a small mess. Some people just don’t change! Yet, the good done overall is much better than the bad and the place has now had a face lift.

But this is just the precursor. One day it struck while I was driving past, that the far end of the lake looked different. Since the pandemic was still ongoing, I wasn’t going out too often. Hence, I hadn’t noticed the work that was happening. It seemed strange but I could see a white wall beyond the lake. Due to the rains, I had stopped walking around the lake (and I had taken to exercising at home). The developments were new and I was unable to point out what had happened. But it was different and better.

Come another day, around 3 weeks back, a post appeared in our apartment’s whatsapp group talking about a tree plantation going on at the Somasundarapalya Lake. I was curious to know more.

On the first possible occasion, I ventured to walk around the lake with Subhashree. At the far end, we saw people working. Not quite sure of what was happening, we waited till we met Suresh. He explained to me that the entire mountain of plastic junk had been cleared, and the 4 acres of land had been adopted by the local community task force to create an Urban Mini Forest. We were intrigued and wanted to see. We were shown the area, the places cleared for the plantation, the rows of saplings planted, the space for more plantation, the rows of bamboos growing along the white wall. It was astounding.

It seems that the plastic was too deep to be cleared completely. So, after razing down the heap, soil had been brought in to support the trees. The trees are being planted in the Miyawaki method wherein, they are planted close by and help each other build a firmer foundation of roots while they grow taller.

While some part of the area still remains to be cleared of the plastic; around a third of the place bears the little trees planted till date. The highlight is a Rudraksh tree—I’ll be amazed to see it grow and bear fruit.

The other highlight is that the plantation has been planted entirely by a set of volunteers, spending their spare time in making heaven out of a dump. I can feel the vision, the common sentiment of envisaging and toiling toward a bright future for the place.

Last week, I joined the group and am astounded by the work being put in. As I said, we humans are capable of so much good too. I can feel the energy in the working group, some people even spend weekdays while a larger team comes during the weekends for an hour and a half to plant as much as possible. There is target of over 1000 plantations.

Added to this, a set of around seven local boys also turn up on their own to contribute in their own way. Goodness and kindness have a way of bringing people together.

This is really the first instance I can recall that I have participated in a social service activity. The experience of my first 2 days of digging, de-weeding, planting and toiling are captured below. 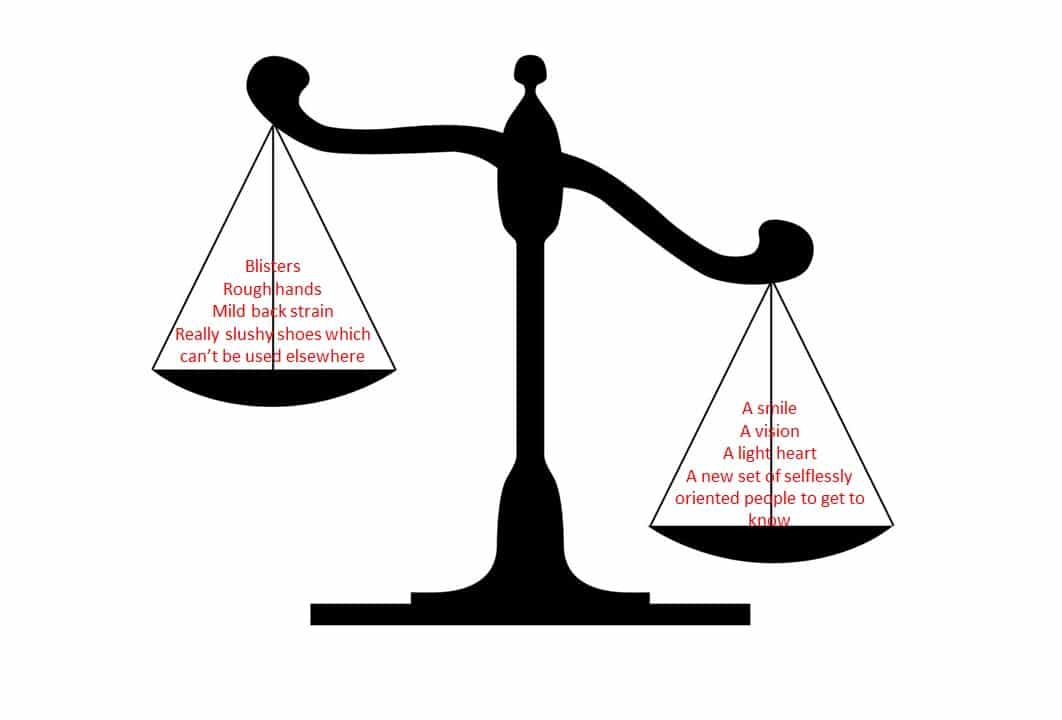 I am sure the inference is obvious.

So go on! Take a step, join something beyond yourself and see how you change as does the world around you. A collective vision and consistent efforts towards the vision can do wonders.

While I’m closing this post for now, I will write more on the topic as I work further towards the vision of Sundara Vana, as I get to know more of its history, the people and of course, the trees who will make our future better and beautiful.

PS: Since at least 2 people asked, here is a link to the sapling of the Rudraksh tree. https://fb.watch/7SAJbCH9YU/

Teachers Day – Dedication to My Teacher
But You were unexpected