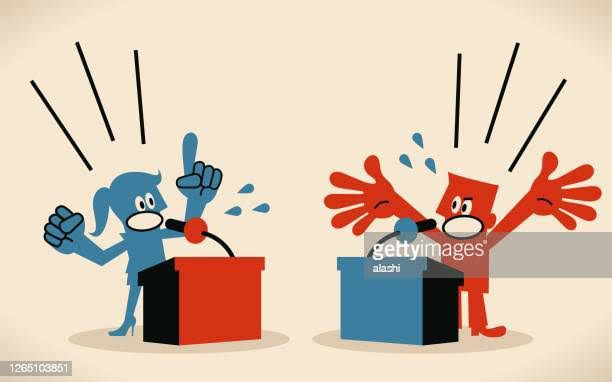 The Difference Between Discussion and Debate.

The Difference Between Discussion and Debate

Yesterday, I was at a meeting. I am part of a cultural group that organises cultural programmes round the year. Tomorrow is Swami Vivekananda’s birth anniversary. So, some of us sat to discuss how to go about it.

But, many things were being discussed. Two middle-aged people got into the debate of whether women are more exploited or men. One was saying, women are more deprived and bound. The other was saying, no, the statistics show, men are being exploited more, and the number of male suicide due to domestic problems are twice as high as that of females.

We were six there. Everyone else was quietly listening to their argument and counter-argument. At some point, I decided to intervene. I have a reputation there as a good speaker. So, despite being many years younger than them, I could say my things.

In front of everybody, I told them, “Listen, you are debating, not discussing. You should understand the difference between these two…And why are you debating at all? When do we debate?—when we want to prove our point, right? But, why don’t you both see that exploitation is on both sides, both men and women are exploited every day? Does it matter more on which side the exploitation is greater, or the solution matters? Why don’t you talk about solutions? You haven’t given any solution till now, only exaggerating the problem.”

Everyone else supported my view. But, observing them I could see, despite being educated and cultured, they haven’t learnt the art of discussion. And I also observed, we are largely problem-oriented in our thinking, not solution-oriented. We talk about problems endlessly but don’t give our brains to find out a solution.

The meaning of the word ‘discuss’ changed over time. It comes from Latin, and by the late Middle English, the word meant ‘dispel or disperse’. Now, in the light of this understanding, the art of discussion involves the dispelling of a problem, isn’t it? The very purpose of going into a discussion is to find out a solution to a problem. But, prejudices and biases work in us. And we start to debate, instead of discussing. We want to be proven right, and want to prove others wrong. That’s a very strong bias in us. When our own points become more significant than finding out a solution, we start to fight. We start to oppose each other.

Next time you start a conversation with somebody hoping to have a great discussion, be mindful of your own biases. Ask yourself—what’s the purpose of our talk? To find out a solution, or to prove a point? And you know what, if your point is right, and you know that, there’s no need to convince others. The truth doesn’t need approval or justification. It seems very foolish to me to debate. Why debate, why not discuss?

I hope you got my point.

Thank you for your time. See you again.

P.S: I wrote a separate post on 3 of our most prevalent biases. Read it here.

My First Visit to Sri Badrika Ashram
How to Celebrate the Most Auspicious Ratha Saptami Festival?