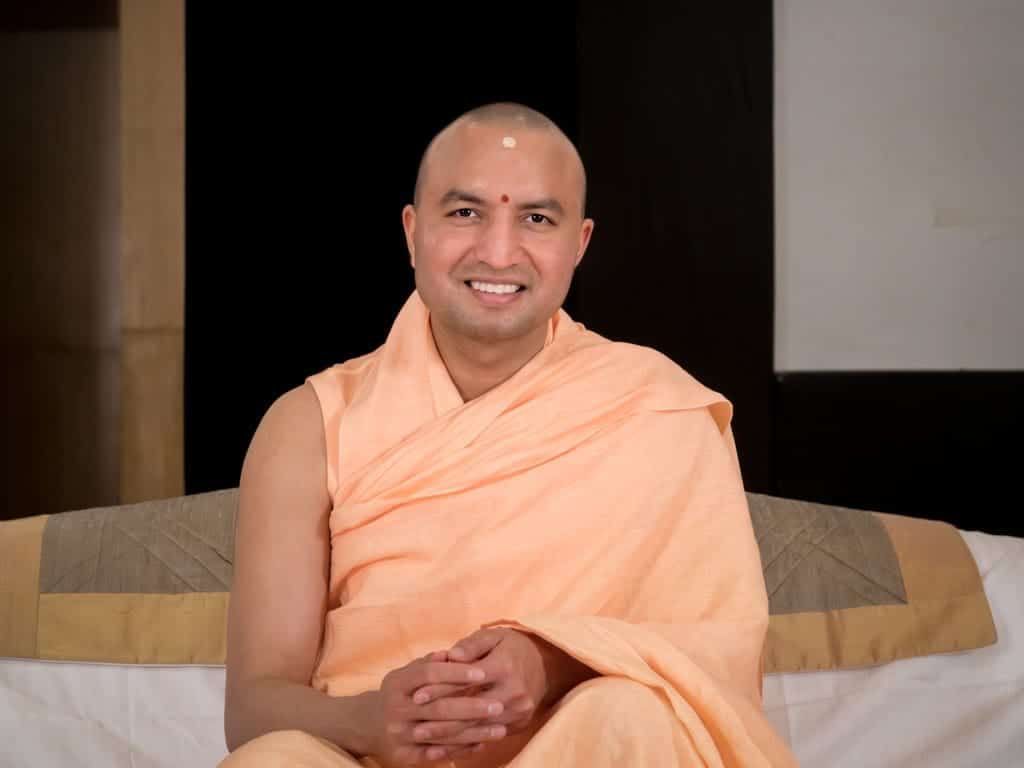 Their are no coincidences, only Divine interventions.

After reading ‘If Truth be Told’, I signed up for 5 day Zen meditation retreat in Bangalore. It was a resort on the outskirts and was like a hill station, calm and peaceful, away from the din and bustle of the city. Having checked in at 12 noon, was free till 5pm. At 3pm, thought of checking the venue to get an idea of how it would be as I would be meeting  Om Swamiji. I had my doubts (The human mind never stops doubting, isn’t?) for to meet the Primordial Creatrix of the universe is no small feat. Is it possible in this day and age? To meet Swamiji is like meeting a muni Vivekananda or an Avatar like Adi Sankara.

As I went to the  meeting hall, little did I expect that Swamiji too would be there checking the audio and visual for the event. He was accompanied by Swami Vidyanandaji and Swami Paramanandaji and the hotel technical team. I did not disturb them as they were busy. All my doubts vaporised like morning mist when I saw him in person. The Tejas, the divine glow emanating from him, his stature and composure. I kept thinking, “Oh my God! he is indeed Godly, no wonder he has met Mother Divine, there is no doubt anymore”. “Where from he is radiating so much energy, is he walking or floating? Like Swami Vivekananda, he too must be from Rishi mandala or Devi mandala”.

The retreat was planned perfectly and meticulously that it felt like cruising on a sail boat blissfully. Then came the most awaited event for everyone – the private audience. Since it was a five day retreat some 300 odd people were allotted 2min time slot each to meet Swamiji apart from the retreat timing    ( it started at 6a.m and ended at 6p.m with three breaks in between) . He was very particular  that everyone had traveled from afar and that he  would meet us  at any cost no matter how difficult it would be for him.

I met Swami Paramanandaji whom I came to know that he was also an initiate from Sri Ramakrishna Math. He told me my date to meet swamiji was on the third day. I requested him can it be preponded  by one day as it was Holy Mother Sarada Devi’s Jayanti day. He said he’ll look into it and asked me to come at breakfast time 8a.m to see it it’s possible to accommodate me.

So when the 6 to 8 am session ended. I headed to Swamiji’s room where the private audience was scheduled without having my breakfast, as it would increase my chance of meeting him, before those who were allotted came after finishing breakfast . Swami Paramanandaji asked me to sit in the two chairs outside Swamiji’s  room.  Since no one turned up and no crowd was there swami Paramanandaji  said “you go and finish your meeting next”. I was overjoyed and sat in the chair. The next  dilemma was, what should I ask him?  I had a few things in mind about family, career etc. But I thought meeting a divine sage is once in a lifetime opportunity, so I decided I will ask for his blessing which is what every sadhak needs. My doubting mind crept in, “If he is a divine soul he will definitely know what you want or have in mind.  you don’t  have to ask, so don’t  tell him, He ‘ll know. A mother always knows isn’t?”🙂. With the question settled, with cold and sweaty palms I waited for my turn.

An elderly couple came out and Swami Paramanandaji asked me to go inside. It was a long rectangular suite with a three long sofa arranged in u- shape with a dinning behind. Swamiji was majestically seated in the middle of the middle sofa, with his legs folded in padmasana. My mind kept nudging me repeatedly  “That’s  not Om Swami, it’s Devi who is seated, it’s Devi”. I prostrated in front of him and sat in vajrasana. With folded hands in prayer mode I told him, “Swamiji, today is Holy Mother Saradha devi’s Jayanti. I got initiated from Sri Ramakrishna Math. I am meditating but I am stuck”. He told me “Read the book ‘Million Thoughts’ and see my you tubes ….”. I mindlessly interrupted him and blurted out before he completed “Swamiji, I know that Mother Divine is holding my hand and guiding me day in and day out but ….” like how in a BMW or Benz you can shift from cruise mode  to  sportz mode, he suddenly became alert and his gaze shifted. I couldn’t look at him and was looking at the floor, I felt intuitively that swamiji had shifted to his mystic mode and was looking into me somehow, seeing not just my past but evolutulionarily where i started and how I landed up in front of him ( Sri Ramakrishna used to say “I can look into a person like how you see what’s inside a glass house”). He was checking whether the last two lines I said about Mother Divine had any credibility. And YES! …. he told me, “step forward”…. he found out!  that I came seeking for his blessing without me hinting anything”. Before I closed my eyes, he had closed his with a firm stern face upright with such serious  concentration and his both hands formed in a mudra which I  have not seen before. He placed a finger on my forehead above Ajna chakra for a few seconds and placed his palm over my head flatly without touching to see how much spiritual vitality is there(My naughty mind for a split second thought, am i going to go into Samadhi like other saints, am i such a good guy?… I know I am far from it😁). As soon as he took his palm from my head, I opened my eyes. I saw Swamiji smiling at me and his eyes were moist a little bit and he just nodded his head. I knew my time was up. I prostrated in front of him once more and turned back. When I came out four to five people had assembled with their allotted time schedule. I thanked Swami Paramanandaji and left.

Why am I sharing my personal experience here? because, we have no ordinary Swami amidst us  but a spiritual power house,an Avatar. He is no ordinary Tantric but an adept like Adi Sankara. Behind the veil of Om Swamiji is none but Mother Divine herself. With his mere  glance and touch he can connect us to the source and give us moksha instantaneously. That means no more ignorance  and pain forever. But the question is whether are we fit to withstand the force that descends through him? I am not fit yet, Let’s make ourselves fit instrument to receive his grace, let’s make hay while sun shines!

81 comments on this post. Please login to view member comments and participate in the discussion.