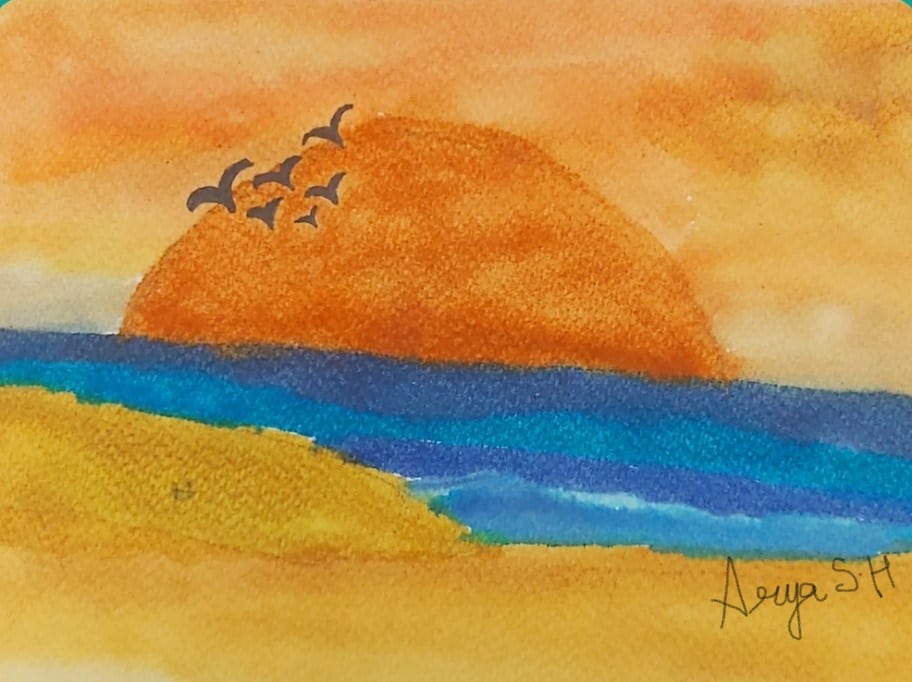 The last day on Earth

The first time you're new to something, you hate it. But in time you get used to things and surprises life has to offer.

“I didn’t know what was going to happen to us. I was waiting as patiently as possible for my friend, who was still nowhere to be seen.  Anxiety struck, I was trying to process the inhuman scene playing in front of my eyes while trying hard to stay sane.

Lost children were running around trying to find their parents or at least one of the parents in the commotion and unrest. Adults were screaming instructions anxiously to young and old to stay close, while screeching sounds of angry birds, the police, and the ambulance sirens were like a constant background score to this disarrayed scene.

Dead bodies and several types of fish clad the sand of the nearby beach. Oh! The beautiful beach with golden sand and clear waters of the Pacific Ocean. , At least it was so just up until December 10th, 2050 which was just 4 days ago. Glass from the cars and crumbled buildings, both large and small, lay shattered into thousands of tiny pieces, smashed by the energy and power of floods that had sealed their fate.  The sea had retrieved or so it felt. We couldn’t be sure. Its attacks were sudden.

At every plea of help, I would want to go but my life was at risk too. Plus I had been instructed to stay put. I didn’t know what to do! Suddenly there was a break and my head smashed into the hard seat of the car (which felt a lot like a rock). By now I had almost forgotten I was sitting cramped in the back of a car with my mother. In fact we had sat like this for too long. I had to get out of the car to see what had jolted us.

That’s when another prodigious, massive, unexpected wave crashed onto the land!

People were carried away with the power of the wave and I went with them. The power of the water was too much for my lean body. I was kicking hard but the salty water filling my very being. I was under the water again! I felt a sharp cut on my hand. It was a kitchen knife, and I had caught on to it in my attempts to swim above. It must have been a part of the debris that washed away along with everything else that came in the path of the great floods.

I swam up to a less crowded place and stopped to catch my breath. I was much deeper into the water by now. I checked my hand out again. A deep, glazing cut flashed across my hand, it was bleeding with bright red blood. It was burning because of the saltwater from the deep ocean. Luckily, I saw a giant palm tree that looked steady under the water. I swam to it and once steady on it, I called out for my mother who at one point had been right behind me. She didn’t reply.  I was panicking now. I called her name out several times but she didn’t reply.

I quickly scanned the flooded area but could not see my mother anywhere. But I kept on calling her name out in the middle of all the chaos when I spotted her beautiful yellow dress with a bright red lace she wore that morning and glowed in it. I saw her now lying motionless. It wasn’t long before I realized she was dead. Gone too far to hear my cries. A big scream escaped me. Suddenly my heart surged and skipped several beats as I realized my mother had left me forever. I was all alone in this world.  Large tears rolled down my sunburnt cheeks.  I started to sob uncontrollably. All the years we spent together flashed in front of my eyes and my heart was heavy as a rock. At that moment I slowly crawled towards her and hugged her tight. I don’t know how long I sat there. My mother was the only living parent left for me. As some sense crept back into me, I realized I had to move on and soon. I gave her one last hug before I let go. I decided to take a few pieces of jewellery on her with me as her lasting memory.

I swam to another taller palm tree. I could see some coconuts on it. My stomach grumbled. Once I reached, I climbed over to the tallest part and decided to drink some fresh coconut water. My dad had taught me a smart way to break through the shell. I drank the sweet water and dug at the soft cream.

I was shivering and it seemed like it was around 4 pm in the evening. The air was beginning to become cooler and I could taste the dirty sand and saltwater in my mouth. The sharp pain on my right hand persisted, my clothes were wet and damp and so were my spirits. Persistent tears rolled down my cheeks. I could only hear more waves crashing onto some parts of the dry land. I was very unhappy and it felt like I was the only one alive. I spent nearly 2 days on the tree latching to its rough branches and drinking from the last few coconuts on it. I was semi-conscious when I heard something new, it sounded like distant helicopters. I struggled to call out for help as I was weak and dehydrated and could barely see clearly through my sleep-deprived swollen eyes.

Soon the bright blue helicopter lowered down. I tried my best to get up but could not. I got inside with the help of the crew and I saw it had nurses and a few other officials inside exchanging some sort of data with one another. The inside of the helicopter was fancy and comforting too. It was certainly an end of the turmoil for me. My condition was low though. I had starved for almost 3 days occasionally sipping coconut water and had several injuries plus the exhaustion. Suddenly I started to have trouble breathing. And then I blacked out.

When I opened my eyes I was in someplace that was definitely hot. My feet were burning, this wasn’t the type of heat I would wish to be in. I forced myself to open my eyes and looked out the window. I saw a colossal sun blazing in the sky like two spheres of fire. When did the Sun get so big? I thought.

I saw a policeman next to me. He was tall, rather handsome looking with black hair, and black sunglasses which shined through the light. He told me that I had been in a coma for nearly 90 days and they were watching me all the time. I was connected with several wires and tubes in my arm which hurt a bit.

I remember seeing this man somewhere but I could not recall where. Maybe he was there in the helicopter.

“Do you have any idea where the heck I am? It certainly does not feel like Earth!” I yelled unpleasantly. With a funny look on his face, he replied, “Ma’am, we are on Mercury, Earth is now flooded. And nobody can, therefore, go back”.

“I am very sorry”, he came close and held my hand empathizing. Maybe because of the shock on my face.

“Mercury! How could we live here?”

Eventually, I came to terms with the situation. I was reminded of something my mother would always say, “Life always presents us with different circumstances. One must never forget to be grateful.” I missed her. But I felt lucky to be alive. “It can’t be that hard to live here”, I thought.

The officer gave me some sort of a thin suit to wear so I could be protected by the colossal “SUN” and eventually get used to the new atmosphere.

The police officer and I walked out of the Hospital on the spaceship if I could put it simply, into my new home “The Planet Mercury”.

Thirty-eight years have passed and I’m still living on Mercury. I got used to all the heat and all the changes we made to this planet to make it habitable. Now I love Mercury as much as I once loved Earth. But I do wish to go there again.

“Alright my little cupcake. What is it? Go on”

“Who was that police officer, and the girl?”

“Well Jill, the girl was me and the police officer was your good old grandfather!”

Everyone chuckled and hugged their grandmother tightly, bidding her goodnight.

Little Lilly dreamt of her grandparents in a spaceship that night.

The first time you’re new to something, you hate it. But in time you get used to things and surprises life has to offer. And may even start to enjoy the things you never thought you ever would!

PS- I am very grateful to Navjot auntie for editing and providing constructive suggestions to make my story beautiful. Thank you

I am 11 years old and 6th grader living in Singapore. One of my hobbies is writing fiction in my free time. I love painting wildlife and enjoy playing the piano. I aspire to become an astrophysicist and learn more about BIG BANG


Login with Email
No Account? Create One
A letter of Devotion
Myth and Reality: Moving from the Face to the Essence