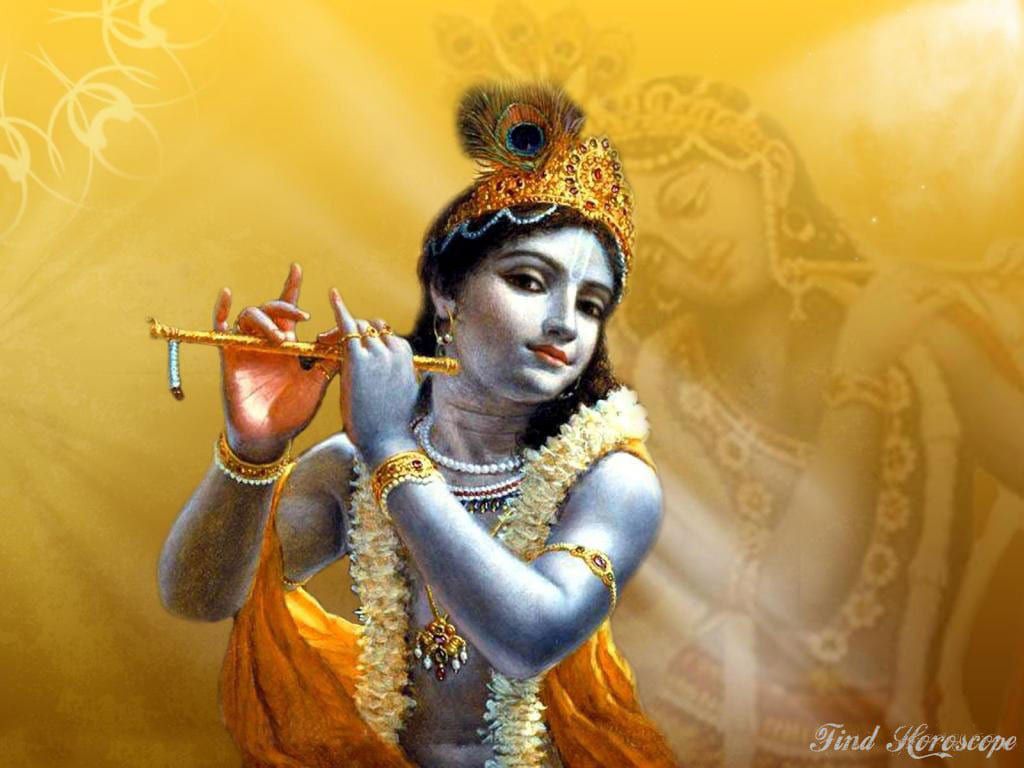 The Leela of Krishna

The reflection of the soul in the mirror of the mind

In 2009, our family planned a trip to Guruvayur Sri krishna temple. It was one of the auspicious month and the temple was crowded, overflowing with devotees. It would take four to five hours in the spiral queue to get to the inner prahara. My parents were lucky, a separate queue near the inner prahara for senior citizens would take just half to one  hour.

During my five hour wait in queue, I chanted the mantra initiated from Sri Ramakrishna Math in 2003. Apart from the darting glances at the beautiful damsels of Kerala every now and then, I imagined the picture of  Guruvayur krishna in my heart and offered flowers at his lotus feet along with the mantra.
I wrestled through  the narrow path of the inner prahara leading to the Garbhagriha eagerly awaiting my turn to get a glimpse of the deity. As the crowd pushed me to the front, all that could be seen inside the small Garbhagriha was total darkness with diyas on both sides and few spots of chandan on a black background . I strained and stretched against the crowd pushing from behind to see if I  could at least get an outline of the idol  but in vain. It got over in a flash.  As I exited the inner prahara, I was in a literal state of shock. My mind raged with disappointment,  “Where is he?  the deity? the idol? Where is the Krishna depicted in every photo of  Guruvayur temple? Why couldn’t I see him? Five hours of wait to have a glimpse and it went wasted. Maybe it was a small idol and I failed to notice him. Maybe, I did something wrong, maybe the darting glances?….”. Everyone were serenely walking out of dharshan while I felt distraught at the experience. With shrugged shoulders and intense pain of having not seen him, I stepped out of the temple.  It was a surprise when my parents said that there is no idol inside and it’s a Stone worshiped by  Guru and Vayu (Guru-vayur)  given to them by Sri Krishna. Being ignorant of  the temple’s history spoiled my dharshan. The anger engulfed the five hour peaceful mantra chanting and silence. I went to the nearby side shop and bought a book to know the temple history. On the whole, a sense of disappointment & irritation lingered in my heart. I wanted to go back and have a peaceful dharshan but refrained as my parents had to wait again.

Two days later, I sat for my routine morning meditation in my room at home. My meditation had always been superficial. Even with eyes closed for one hour, the monkey mind  never stopped it’s chatter. I lighted a new pack of parijata incense (goloka from Iskcon) while thinking that parijata flowers were one of krishna’s favourite. As usual, I casually sat in padmasana and closed my eyes. Like a tortoise which withdraws it’s limbs inside , my senses were shut forcibly .  So forcefully that any effort to open my eyes or move my limbs turned futile. What happens when a class master enters a noisy class, pin drop silence isn’t? So also,  when the master of the body walks in ,what can the senses do but stay mute. I felt an extraordinary silence within me. Immediately in my heart region, as if an inner secret invisible door flung open,  I saw a brilliantly bright Golden Orb shining and sending forth wave after wave of  bliss. I was totally bathed in bliss, an extraordinary ecstasy which I had never before experienced. There existed little body awareness. It’s as if only the Golden Orb existed, with my mind thinking simultaneously as to how I am experiencing this with my eyes closed and how I was able to think. The thought of Sri krishna recurred repeatedly in my mind and the Golden Orb was seen distinctly separate in the heart as if behind a veil. The saying , “The soul is ever bathed in an ocean of bliss” was apt indeed. It would have been ten to fifteen minutes and slowly I regained body consciousness, the Golden Orb was not visible anymore. I was dumb struck to notice that I was wearing a molar to molar smile and also profusely shedding copious tears from the corner of my eyes. I was totally unaware of what my body was going through. The bliss stayed for a few days and subsided.

I have read in the book, “The Gospel of Sri Ramakrishna” that Sri Ramakrishna used to go into ecstasy very often known as Bhava Samadhi. But a normal materialistic guy like me living a mundane life, what have I done in terms of sadhana or spirituality to deserve such an experience. When I went to the temple back then, I did not have any wish or desire to ask for, only to see the deity and have dharshan (I was unmarried then. If I went now, I would give a list for one TB ) . It’s been eleven years since, I am unable to repeat the experience with my meditation or japa. My mind is still the same old monkey it was eleven years ago, very much worse. Well, It couldn’t be anything else but his grace and grace alone, the reason behind my experience. Why?  Maybe he felt, ‘This guy without knowing my history came all the way just to see me and got disappointed” or to reveal to his disheartened bhakta, “I am not only there (in the temple), I am also here (inside everyone)”. I will never know. He could have revealed himself in a dream, a glimpse would have been enough, but a profound blissful experience in waking state, he indeed knows how to give surprises and that too with such magnanimity!

I was in dilemma to pen down my experience as it puts fairy tales and science-fiction to shame. But Om Swamiji’s tag line, ‘share your truth’ is what made me to go ahead. Any rational, pragmatic mind will consider the above experience as nothing but madness or breakdown of a fragile hysterical mind. If  1+1+1=3, then yes Love (the head over heels kind) + faith (the blind one) + bhakthi (the one that melts) towards your Ishta = God vision.

Is this why Meera sang, “If he is in the idol, I will worship a mountain…..”?

Is this what he did to the Gopi’s of Vrindavan captivating them with divine intoxication of the soul?

Is this why Jesus said, ‘The kingdom of God is within…..’?

The closest semblance of what I saw in my experience is the image of the Matri Mandir in Sri Aurobindo Ashram, Auroville.

Next time  when you visit a temple don’t hesitate, not even for a second whether the deity knows or not that you have come to visit. Even if you miss, The deity doesn’t! (For he is seated inside as the Antaryaamin).