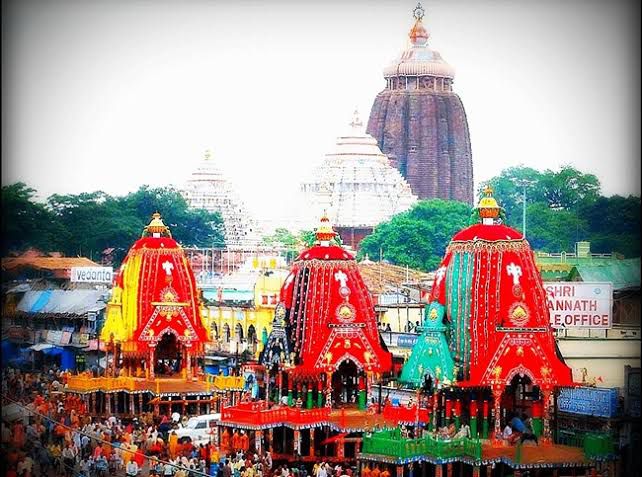 The Legend of Lord Jagannath

On Saturday, the chariots of Lord Jagannath, Lord Balaram and Devi Subhadra made their return journey to the Puri Temple from the Gundicha Temple, which is considered as their maternal aunt’s home. So, why does Lord Jagannath, with His elder brother and little sister go to their aunt’s house? And how did the worship begin in the Puri Temple in the first place?

In today’s post, I shall elaborate on the origin story of the temple.

King Indradyumna was reigning at that time. Puri was called Malab back then. He was a great Vishnu bhakt and he had a great desire to see Lord Vishnu.

A rishi came to his court one day. He told the king that he knew how much he wished to see the Lord. He informed Indradyumna that Lord Vishnu is worshipped somewhere in his kingdom in the form of Nil Madhab. The king asked him where he could find Nil Madhab. The rishi was oblivious to this fact. He went back.

The king called for his foremost pujari—Vidyapati, and instructed him to gather information about Nil Madhab’s whereabouts. Vidyapati set out on his journey. He eventually came to a forest where Shabar people used to live. He met their chief, Viswabasu.

Viswabasu was the chief worshiper of Nil Madhab. But he performed his puja in a secret cave, and as a rule, they never allowed anybody to see Nil Madhab. Vidyapati requested him to take him to the cave, but Viswabasu declined his request.

But Vidyapati was determined to find Nil Madhab’s secret cave. So he started to stay there. Slowly, he and Viswabasu’s daughter, Lalita, fell in love with each other and eventually they got married.

One day, Vidyapati said to Lalita that she must convince her father to take him to the cave. Being his daughter, Viswabasu agreed, but he put a condition: Vidyapati would go blindfolded. And Vidyapati agreed.

It turns out, he was clever after all. On the way to the cave, he kept spreading mustard seeds on the path to make a trail. Eventually, he entered the cave and was spellbound to see the deity there. The next dawn, he went out alone following the trail. But this time, he couldn’t find Nil Madhab there. The image magically vanished.

Vidyapati went back to the king. Indradyumna himself came to that forest, but he too was heartbroken when he could not find Nil Madhab anywhere. He went back to his palace with a heavy heart. But Lord Vishnu appeared in his dream and instructed him to go to the sea where he would find a log of neem wood floating. Lord said to him, “I will take worship in your kingdom as Daru Brahma. You must make murtis out of that neem-wood and build a temple for me. I am pleased with your devotion. I will reside in your kingdom.”

The king, along with Vidyapati and others, went to the sea, where by divine play, a big log of neem-wood came floating. But alas! Nobody could lift it. Even elephants failed to lift the wood. The king’s heart sank. Lord Vishnu again appeared in his dream and instructed him on how he should carry the wood to the palace. Lord said, “You must take Viswabasu with you, because he is my ardent devotee. Give him his due respect. He would be able to lift the wood.” The king took Viswabasu with him and brought the haloed wood in a golden chariot.

But, to the king’s dismay, no murtikar (sculptor) was able to carve out the wood. It was unbelievably hard. The king got worried. But, Bhagwan Viswakarma, the architect of the gods himself, came to the king’s rescue. But he disguised himself as a murtikar named Ananta Maharana. He told the king that he could make the deities, but he needed a large room and nobody should open the door for twenty-one days. The king agreed.

Bhagwan Viswakarma went into the room and locked the door. Nobody knew what was happening inside. As days and nights went by, everybody’s anticipation also grew. But on the fourteenth day, when the queen came to the door and no sound was coming from inside, thinking whether something had happened to the murtikar, she opened the door. They were stunned to see three incomplete, big-eyed murtis of Lord Jagannath, Lord Balaram and Devi Subhadra. There was no sign of the murtikar. He mysteriously vanished.

The king thought they had committed a grave blunder. They shouldn’t have opened the door. Guilt wrapped his soul…how can they worship those incomplete murtis! The king became sorrowful.

But, as it turned out, all this was according to the wish of Lord Vishnu himself. He appeared to king Indradyumna once again and comforted him saying, “Don’t worry, O King! I wish to be worshipped in this form.”

That’s how the worship began. And from that time on, the descendants of the Royal family are the official custodians of this temple. Viswabasu’s lineage continued the worship as the chief family of pujaris.

Every year, the Raja of Puri himself comes to formally start the Ratha Yatra festival by sweeping the marg with a golden broom. Lakhs of devotees come to Puri to witness this chariot festival.

There are also many myths and stories related to Lord Jagannath and the Puri Temple.

In the next post, we will see the fascinating story behind the Ratha Yatra festival.

Thank you for your attention.

P.S: The quoted lines are my own paraphrases. As this is a legend, there is probably no written mention of this story. However, the stories of Ratha Yatra are there in Skanda Puran. We shall go into that the next time. Stay tuned.