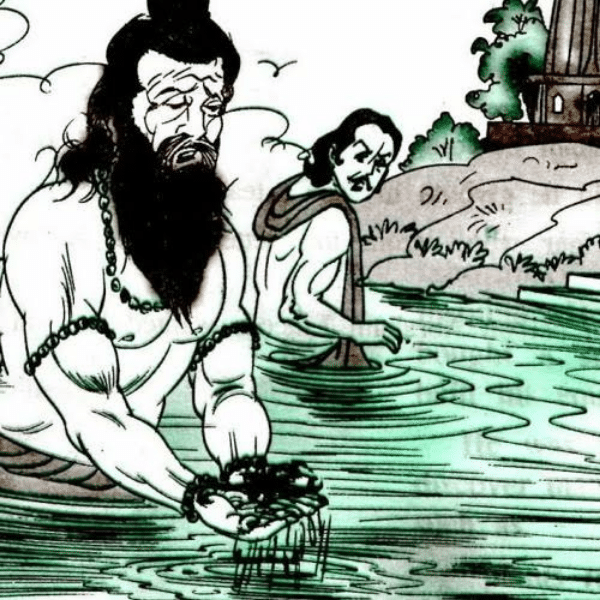 The Parable of the Monk and Scorpion.

A Story of Nature.

The Parable of the Monk and Scorpion.

A Story of Nature

While he was bathing, the Sadhu saw a scorpion drowning, and it was struggling. The Sadhu, out of his compassion, took the scorpion in both of his palms. The scorpion did what it knows best: it bit him!

The sadhu gave a crying sound. But he didn’t drop the scorpion.

The disciple, standing on the bank, saw the scene and was bewildered. Why is his guru doing such a foolish thing? Doesn’t he know that scorpions are poisonous creatures? The discipline requested his guru to let go of the scorpion.

But the sadhu had other plans. He was taking the scorpion to the ground. The scorpion bit him again and again. He endured the pain…but didn’t let the scorpion go.

The discipline became more restless now. He was beginning to think that his guru’s a fool!

Finally, the sadhu brought the scorpion to the ground, and the scorpion, relieved at last, went on his way, without even thanking the Sadhu! (just joking)

The bewildered disciple asked the guru with incredulity in his voice: “Why did you not let go of the scorpion Guru Ji, even after being bitten by it so many times? Why being so foolish?”

The great guru replied: My son, the scorpion is a venomous creature. I know that. I didn’t forget that. It bit me. Because it’s his nature. He bit me because he was already scared! He doesn’t have the discrimination to decide whether I was helping him or not. It acted instinctively, but I am a Sadhu. What sadhu am I if I am not kind to every creature! As he cannot let go of his venomous nature, I can’t forget my generous nature. He did what he knows best. I did what I know best. Biting is his nature, helping is my nature. If he doesn’t forget his nature, how can I forget mine?

The disciple learned his lesson then.