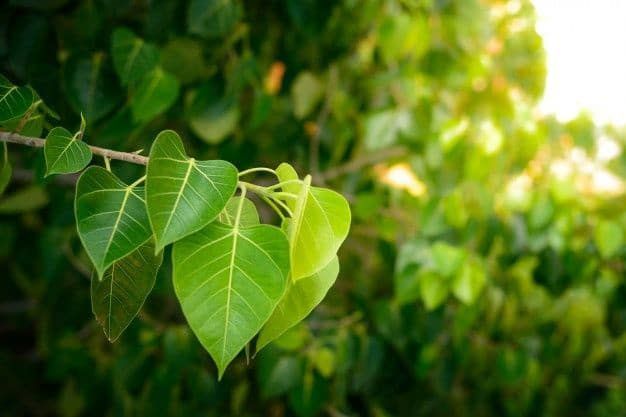 A cycle of birth and death under its holy shade

The sweat beads on her forehead glistened like pearls in the sun, the red vermillion between her brows effulgent like the sun itself. The three wrinkled lines forming creases in the perfect round red mark on her forehead slightly hinted at the huge chest of experiences and wisdom beneath. Not just of this lifetime, but from the previous ones too to which perhaps she had gained the secret access. A secret that never escaped her lips. The villagers kept guessing and spreading stories about the untold though. She barely spoke, yet a gentle otherworldly smile seldom left her lips, as if to compensate for the dearth of words.

As she sat in rapt attention with eyes closed under the peepal tree, the leaves above danced topsy-turvy, inviting the wind, trying to create a little breeze to fan the old lady whom they have been watching since the moment she stepped into this world. The peepal had seen it all, from her tiny baby form to this old wrinkled one. It had heard all, from her first cry to her deafening silence of years.

Such was their connection that it seemed as if she had chosen to take birth under this tree at will. Roughly some sixty years ago, while taking a bath at the river in the wee hours of the morning, her mother had started to feel pangs of labour. Not wasting another moment, she hurried back home along with two neighbouring women but couldn’t make it a step farther than the peepal. The women helped her settle down on the small round verandah under the tree and within minutes, a tiny baby girl with round face, reddish skin and bean-like fingers and toes had arrived into the world. Twenty one days later, she had been given a name to identify with – Nirmala !

Maybe, now she has chosen the same spot to depart from this world as well. It has been eleven days since the last morsel of food went into her body and since the past three days, she has stopped sipping water as well. The villagers come checking on her multiple times a day, their love and concern for her is understandable. They come with anxious hearts and heavy breaths resounding in their footsteps praying to see her alive. And then once they get a glimpse of her sitting absorbed in herself with an ethereal glow pervading her entire body and spreading to the tree, their hearts derive instant respite like the parched soil after the first downpour in summer. They walk back to their homes and fields, joyous and secure like a child who peeks at his mother and then gets back to play.

Sometimes a group of kids come by and sit on the ground below her verandah; in silence with closed eyes and crossed legs just as their Nirmala Maa is sitting. They don’t whisper, they don’t giggle because they have been given strict instructions not to. When their little minds can stay calm no more, they poke each other signalling to leave. And one by one, they bow down, smile at Maa, pick up their slippers in their hands and walk away with measured footsteps.

Twelve days ago, Nirmala had given the villagers clear instructions that they need not bring her any food from the following day. That she doesn’t want to be disturbed in any way, neither by people nor by her own body and mind. If they found her dead anyday, they should bury her under the peepal tree. It was her last wish! Which the villagers fervently prayed everyday not to come true. They wanted her presence in their village, in their lives. A silent one was acceptable but the thought of her passing away, the image of the lone peepal tree without a trace of Nirmala around ripped their hearts.

She is their Maa! For all of them, toddlers, young and old alike, possessing a magic wand to make them forget their worries and caress their bruised hearts by sprinkling the stardust of love and peace.

But things were not like this from the beginning. She herself had traversed through a long ordeal of bruises and battering in this same village at the hands of many a villagers. Humiliation, deprivation, physical and verbal abuse – all these gifts had been bestowed upon her in plenty by life. She had absorbed them all inside without knowing what else to do, everytime carefully retaining the gift wrap outside to envelop her. As layers upon layers accumulated on her surface thickening the cocoon, her insides grew softer and lighter. Until one day, when the cocoon fell off completely, notwithstanding its own weight and she flew away from a world of suffering to one of everlasting bliss.

She remembers it all just like a favourite story of her childhood which once used to, but no longer affects her that the ugly witch cursed the princess into the jungle with a thousand nails on her body. Now, she loves them all alike, the princess and the witches too.

The villagers remember it all too, and recount the incidents many times over laden with mixed feelings of joy, sorrow, anger and guilt.

One day, little Niru of six years was playing in a puddle in the fields when a song in a female voice reverberated in the wind. It was faint but sweet. She couldn’t understand the lines, however one word caught her fancy. It made her spring to her feet and start walking in the direction of the voice as if being possessed.