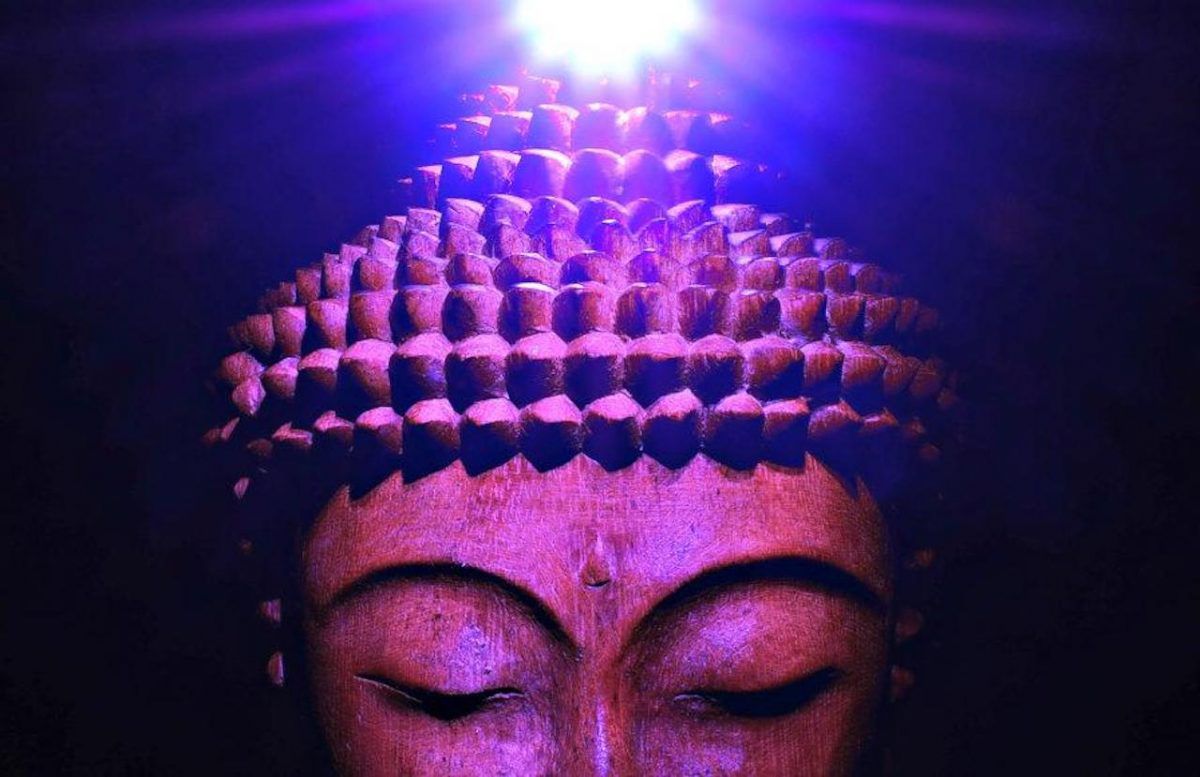 The Sahasrara – The Mystical Thousand Petals

Is it real or just an imaginary theoretical construct

This is a long, dry and boring post. So, those  who are short of time can skip this🙂.

It was in 2007, I had completed my Post graduation in Maxillofacial Surgery. My parents were joyous that I had completed my education and ready to start my practice. They even built a new room in first floor as I was about to finish studies and had to enter samsara. Much to their ire, I took  a six month sabbatical from everything and devoted my time to what I loved the most. I didn’t  go elsewhere because the attachment  for my family was so strong that I didn’t  want to see them disturbed. Invariably they got insanely disturbed as I meditated at home.

I furnished  the center of the newly built empty room with only an asana( a custom made cushion), an incense holder and the books on meditation and songs in Tamil (bhajan books  from Ramakrishna math) . I spent the next six months in meditation, prayers and reading the texts I had with me at that point in time. When it became monotonous , I took a bus ride to coimbatore city and continued my sadhana in an apartment which my dad never rented.I had placed The bhagavatam and Sri Aurobindo’s ‘Essays on the gita’ in the apartment. Day in and day out I  kept repeating the process of japam, meditation, contemplation, reading. When I watched the television, it would be a select few channels which had the discourse on Ramayana and Mahabharata by various Tamil pundits.When I got bored I would read the  Iskcon’s ‘Krsna’ and ‘Gita govinda’ by Jeyadeva Goswami which were filled with  bhakthi. After reading a portion I would contemplate in padmasana with my eyes closed.

Reading the books of Sri Aurobindo was nothing short of a Sadhana. I understood why there was no initiation, no Guru-disciple, no mantra chanting in Auroville, Pondycherry; because Sri Aurobindo had cryptically engraved those in his books. By the time one completes any of his books with total understanding, one definitely would be enlightened.

None of the Avatars in the past or present had spoken anything beyond samadhi or enlightment because it is useless in the first place. The second thing is, it’s all paradoxical and would not make any sense and would confuse the reader even more. Sri Ramakrishna says, “I would love to tell you what’s beyond but you know Maa Kaali holds my throat and doesn’t allow me”. Looks like it’s  only to Sri Aurobindo that Mother Divine had consented to describe and lay down in writing about what’s beyond the material world in his book “The Life Divine”. It would be an understatement if I went onto say that he has descriptively  depicted  the blue print of the divine cosmos and the divine itself. But then again, the book is literally impossible to comprehend.Not only this one, all his books are similar. For every line one reads, all probable  doubts that the mind can create, he goes on to explain in each and every way possible, so that the mind quiets down and ceases. In the begining, Sri Aurobindo’s books gives a terrible headache for each and every page one reads but when you complete it, the experience one gets intellectually and intuitively is worth every second spent on it. If  anyone wants to experience a glimpse of  enlightenment by reading alone, if abundance time is at one’s disposal, then  one  can try his books. The e-books are available for free download  for personal use from the Ashram’s official website  here.

In 3 months, I had completed the first half of the “Essays on the Gita”. A particular paragraph caught my attention which overwhelmed me. It’s in page 310 from part 1 of second series titled ‘The secret of secrets’, it’s as given below 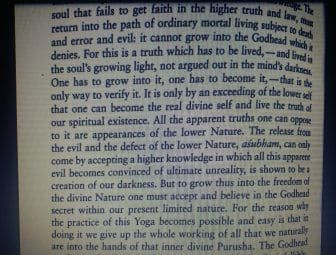 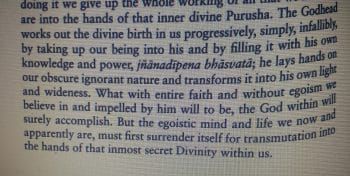 The time was around 3p.m. I closed the book and closed my eyes in padmasana. I felt a deep silence and emptiness in me. As I continued, a firm pressure was felt between my eyebrows and saw a luminescent radiant light. I continued  focusing at the luminescent light. Simultaneously high above I could see with my closed eyes,  a lotus with golden outline with petals facing downwards like how the hair sticks to the head when in shower. I couldn’t see the entire lotus but only a small portion of it, as if  focusing a specific spot. I heard a crackling sound in my ears as one opens a chocolate wrapper. For a few seconds my breathing stopped and one petal in the golden lotus (only one of the many) opened up with continued pressure in my forehead. Then everything became normal again. It was a 10 to 20 second glimpse inside myself. My breathing became normal again. I opened my eyes, I couldn’t believe what had just happened. I couldn’t call or share it with anyone,  os.me wasn’t there. Not even facebook, youtube or whatsapp. I wrote many a  letters to my guru who said, ” keep praying to the holy trio, they will take care of everything”.

What changed after this? Reading is one thing, understanding is something but experiencing is everything.  After this experience,  my faith in the scriptures and the ancient truths about the divine became rock solid. so solid that I felt the divine will definitely be there for me always, forever. that if you start to limp towards the divine, the divine will sprint towards you  waiting  to unveil true love in you.

In the next two months, after the experience I decided to wake up early for meditation by 5am. Because I used to start my sadhana after 7am with a strong cup of coffee. If I started any time sooner I would doze off and  the whole day was ruined. All my sadhana were of the tamasic type randomly doing stuff what came to my mind. Everyday before the alarm rang At 5am, I felt intuitively that a sadhu patted me to wake up and sit as it was time for sadhana. Maybe it’s  the lineage, when you sincerely do a sadhana even though if it’s  a tamasic one, they would bolster your efforts and guide us in the right direction. This went on until I started work.

My brother would warn me saying that my sadhana was a means of escapism from work. I would be lying if I said he was totally untrue. He would say even if you become a monk, still money is essential. When that is made everything else becomes easy. I had the reverse view that God is essential, when the divine is found everything else becomes easy. Sadhana after financial freedom is a risk free peaceful method to reach the divine but the problem is when to stop the financial pursuit and start the spiritual.

Aurobindo’s passage tells just that. With all simplicity, devotion and faith when one approaches the divine.  The divine’s will and light will manifest and take forward what needs to be done as long as the ego doesn’t interfere  and screws up the process.

As my fifth month of sadhana came to a close. It was not only my forehead where pressure was palpable  but also at home where it was 10 fold higher. Finally, my Mom fired the brahma-astra, either start work and tie the knot or else get out. So, I stopped my Sadhana and started working. For the next few years I somehow dodged my parents to get married but how long can you dodge the divine. The divine knows how to pull the strings to offload the prarabdha for what one is born for.  The very road  I took to avoid my destiny lead me to that and I tied the knot in 2012.

1.The thousand petal lotus is not an imaginary reference to Sadhana but exists for real.

2. But where does it exist? My intuitive guess is that it might be in the causal body or Anandamaya kosha which exists after body, prana, mind and intellect is no more. As krishna says that whatever little sadhana we do passes on from one life to another.

3. The bounty the divine awards is amazing, I did not have anything  specific to achieve in mind, only to experience the divine. Even now  after 14 yrs, being fully immersed in samsara ( why do I start my post in 2001, 2007 , long long ago ….. I had packed my sadhana to the attic) marching towards financial freedom, many a million times I had forgotten the divine but the divine doesn’t  and have felt the presence too  often in my life.

4. So,keep the faith, Trust the process and know that the divine is watching us through the guru. We are humans , we falter and fail. What’s it the divine can’t  do to pull us into the divine realm at any given moment.

Let’s keep marching, the divine is just around the corner waiting for us to figure out the mystery called Life by ourselves.