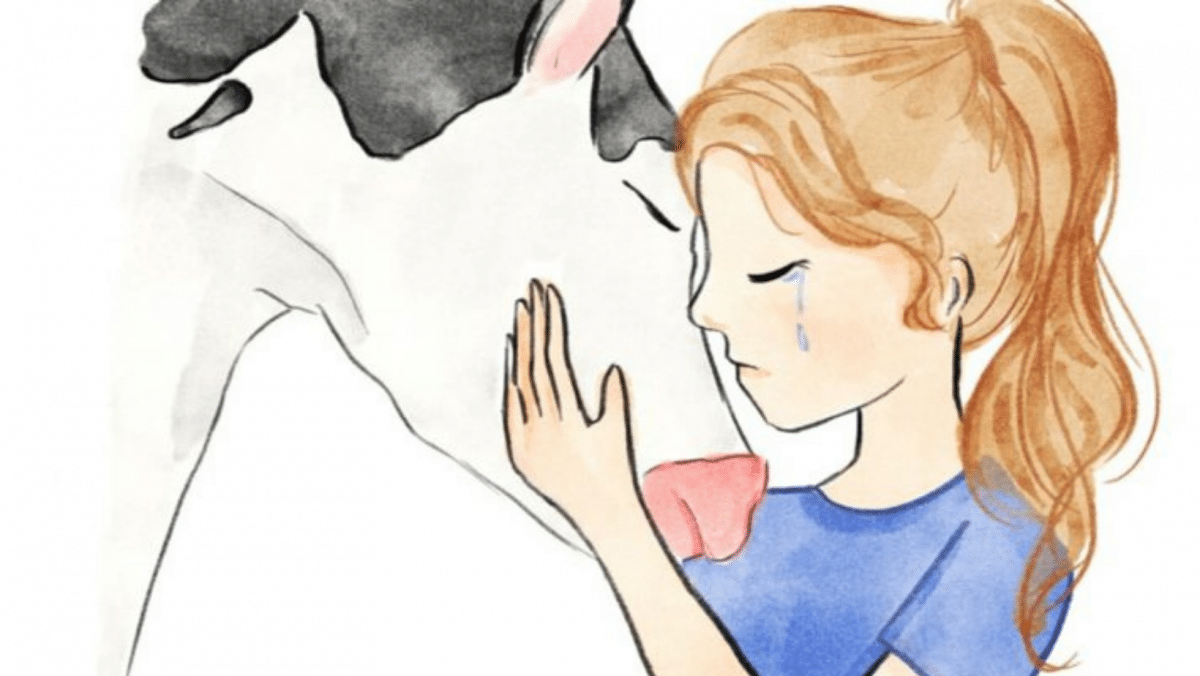 "And remember what your Guru told you?" the voice said

It’s the law of karma and cycle of time, and no one is spared from them,” my mother said with a compassionate heart!

That cow near my house seemed to be in agony just as we humans are, from time to time. She had the owner-stamp painfully engraved in her skin and her poor condition moved me deeply. I snatched the plastic bag from her mouth and shoved a loaf of bread instead; with immense love.

We both cried. She perhaps, at her miserable state for being abused, mistreated and abandoned by her owner, and I for being in this world full of cruelty (although it’s full of kind people that makes it a liveable place, and I am deeply grateful for that).

Yes, we both really did cry! I surely mean the “cow too!” Tears served as confirmation- that were streaming down her eyes.

We found a common space of excitement too, after the painful crying–YAY! We both have black eyes!

After feeding her, on the way back home, my head was pounding with the ‘big whys’ to which I have found answers from the spiritual masters, but yet, haven’t found myself to come to terms with them. Therefore, I am still seeking and discovering.

I had heard somewhere that the Universe does not judge (god, creator, greater intelligence whatever we may call it). Yet, the judgements exist and the consequences prevail.

I asked, “who is the judge of our karmas? The laws of nature exist but who judges?”

My inner voice said, ‘the ‘law of cause and effect’ is constantly in existence. It is just and fair to all, and justice rests within the pure conscience of the human system.’

I asked, “the laws govern our well-being but where do they come from?”

My inner voice answered again, “The supreme intelligence. The cosmic integrity restores the balance of possibilities and limitations. Justice, fairness, and equality stem out of empathy, sensitivity and compassion; the virtues we humans are gifted with, but often allow to rest dormant and dead.”

‘The imbalance between looking outside and turning within (inward) stockpiles into mountains of injustice we not only serve others, but our own self too, as we lose the sight of our source, service, and selflessness. Only if could turn to the source, turn inward, and allow for the right thing to happen–from the space of faith not fear, fairness not force.

My final question was, “why do we creatures suffer?

“That beautiful white cow was in pain, in perfect order of the laws of nature; facing it consciously, and gracefully. She seemed to be doing her task of hunting food in harmony, every day! The same law of nature rewards her too when she finds compassionate souls that are designated by the divine, to help her. When the pain is dealt with consciously, we often find our lessons, our larger role, our deeper purpose—through our higher self.

The pains of cow, yours or many other creatures are only restoring the grand balance and illuminating the role of justice in the ‘law of karma’– in the intelligence of greater force and its synchronicities.

And remember what your Guru told you? “Pain is inevitable but suffering is optional.”

Just that very moment, I swung back into a balanced state and my suffering seemed to evaporate; not to say the pain too.

I looked back at that white cow and she was still chewing her bread, in pain, yet gracefully. I thanked her for opening the doors of grace for me; the grace of God– the inner voice that spoke to me to relieve me of my suffering and those ‘whys.’

I realised that our creator grants abundant possibilities and opportunities when he gives pain. He also gives the option to deal with it consciously and gracefully by making it a conduit to let harmony and empathy flow.

With this transformative exchange with the white cow, I moved from one end of the spectrum to the other i.e., from the receiving-end of the pain, to the other end—the place of giving, without suffering, just as my Guru had told me.

To be exact, it was:

“Pain is inevitable but suffering is optional.”