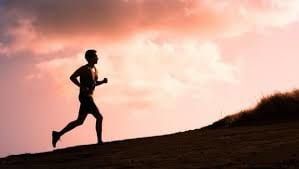 Travails of the Running Man

It was 5:15 AM on his Garmin, as Rahul parked his car opposite DLF Belaire. A smile appeared on his face as he realised how perfectly he had timed it all. By the time its 5:30, he would be turning right onto Gurgaon Faridabad Road, or GFR, as the running community fondly calls this road. Probably the only road which gives amazing practice for hill repeats at the stretch just before Victory Valley apartments However, the road had become notorious of late for the high speed traffic which one has to handle, especially after 7:00 AM.

Rahul had started running almost 4 years back. It started as a very innocuous suggestion from a friend in a party. ‘I am running the ADHM, why don’t you sign up?’ Shivani said during the party. Rahul was surprised, as he had not heard about the event ever!. Hiding his ignorance, Rahul nodded and said he would consider the idea. As he researched later that night, Rahul noted that the 21.1km distance of the Half Marathon did not look monumental. The tricky part was it was only 1.5 months away, and generally, one needed at least 3 months to prepare for the first run. While Shivani ultimately did not run the event, Rahul had a decent time of 2:22 in his first ever Half Marathon!

After the customary stretches and warm up routine, Rahul started his run at 5:20. He had checked on the running group, GRR (Gurgaon Road Runner)’s WhatsApp group the previous evening, that they planned to run on the more easy track around Galleria market, more popular among beginners and people who preferred an easy run. Being his fourth year of Running, Rahul preferred more challenging tracks like GFR, to enhance his endurance levels. At the 1.5km mark, Rahul felt some pain in his right knee. As a seasoned runner, he recognised this as an initial niggle, which is typical of the phase: ‘Why am I running’, ‘oh! I miss the comfortable bed’, ‘hope I am not damaging my knees for ever’ kind of questions emanate, based on what day of the week it is !!!. Rahul consciously reduced the impact of the landing on his right leg for a few steps and then re-balanced his body to take some extra weight on the left leg. After a few hundred meters, pain was all gone. As he reached the GFR road, he was able to capture the majestic view of the rising sun beyond the grass lands and not so dense forest of the Aravalli range. While the drive for planting trees and preventing deforestation was being talked about, there was visible increase in dust and pollution levels in the Millennium City.

Before moving further on the easy downward slope section to the right, he picked up a bottle of water from the young volunteer, a part of the initiative of Coach Ravinder, one of the most popular coaches in the City. Thanking him for the kind gesture, Rahul decided to increase his pace to the 5:45-5:50 levels. With the music of his favourite English play list playing in his wireless Jabra headsets, Rahul was getting into his comfort zone.

As he entered the long slope towards the Valley View Apartments, he saw a few runners on the opposite side of the road, wearing the distinct Yellow T shirts, trademark of BCY, Boot Camp Yellow, another popular group in the city. Rahul had had a few running stints with BCY and a few training sessions with those members on Saturdays. Waving to a few people whom he could recognise, Rahul increased his pace to 5:15 level, taking advantage of the easy slope.

Crossing Valley View Apartment in a breeze, Rahul noted that he was doing well, having crossed the 5km mark in a comfortable 28 mins. He was on target for doing a 15K in less than 1.5hours. A few minutes later, he was overtaken by a string of cyclist, in the distinct florescent green Tees and helmets. They were part of one of the Cycling groups in the City, called Pedal Yatri. Apart from running, cycling had also become popular of late, as one could go longer, with lesser effort. But cycling is considered ‘unsafe’ due to the chances of being knocked over by a speeding vehicle from behind. Unlike running, cyclist have to be in the left side of the road, going along with the traffic. While going in large groups partially reduces the risk, one can never take their foot off the pedal (pun intended!!).

As he crossed the TERI course on his left, Rahul wiped sweat from his forehead and arms. It was typical  warm day in June and he knew that the return leg was going to be a tough one, especially when he has to cover the steep incline back towards Gurgaon. As he took the U Turn just before the toll plaza, he noted that he was doing fine for his target. With 8kms in 46 mins, he decided to speed up to his preferred pace of 5:25-5:30. Just as he did so, a string of bikers whizzed pass him in high speed. This was the famous group of Harley Davidson bikers, roughly 35-40 in number, who would be seen driving by every Sunday morning, looking majestic in their class of bikes. Not as healthy as running and cycling (and surely a lot more dangerous), biking has its own share of followers, with biking trips to Manali and Leh (from Delhi) getting lot of signups.

As he crossed the Mangar village area to his left, Rahul could feel he was in ‘the zone’. The legs were moving subconsciously, with minimal effort, and his thoughts drained off to the tasks that lay ahead for the week at work. As he glanced on the other side, he noticed a woman in the Blue i10 on the other side, slowing along the curve in the winding road. The dimple on her cheek reminded him of Preeti, whom he met at Delhi Airport a few days back. She had replied positively to her message for a coffee meet later in the week. It was ironical, that they had been in the same city for more than 5 years, yet had not connected earlier. While LinkedIn frequently throws up suggestions for ‘People you might want to know’, Preeti’s name did not appear ever. Being a not very serious relationship 18 years back, Rahul had also not made an effort to look her up on any social media platform.

Crossing the Valley View Apartment to his Right, Rahul noted that got slower at the 10km mark. A side effect of letting mind drift into topics other than running, Rahul lightly tapped himself on his head ‘Sudhar ja beta’ and smiled. Completely wrong time to accelerate, as he reached the deadly upwards incline on the road, which runners frequent for their ‘hill repeats’. He had saved his second bottle of water for this critical leg. Taking couple of sips, he mustered courage to push forward. He targeted to complete the incline without stopping or walking. If he could do that, he was sure to  have it easy on the subsequent stretch of flat and then the  slope towards Belaire at the end.

Halfway on the incline, he felt a light tap on the shoulder, ‘Aur bhai, aaj Kitna karna hain’,the friendly voice of Abhishek Mishra was easy to recognise. The first and still one of the very few Ironman and UltraMan from Gurgaon, Abhishek has done a lot to motivate lot of people to take the running seriously. With the Millennium City Marathon, MCM, he has created an ideal practice event for ADHM. ‘Target is to do 15 in 1.5, and I am feeling short on the pace right now’, replied Rahul. Abhishek suggested breaking the target into 3 stretches of 1.5kms each, to complete the remaining distance and looking at small ‘highs’ to achieve the big goal. Rahul thanked him as Abhishek moved ahead effortlessly.

As the road moved towards the right and the flat part of the road was in the vicinity, Rahul felt lot more comfortable now. Saying ‘ No thank you’ to the volunteer serving water near the Golf course Extension Road turning, Rahul waved to him and moved on.

As Rahul was in the last stage of the flat track and the final left turn, Rahul’s mind again drifted towards the rest of the day. After leaving his daughter at the bus stop, he had 45 mins time for shower and breakfast. He was looking at a long day ahead with string of meetings, few calls and important report submissions in between. Rahul had observed how his productivity used to be higher on a running day. It was hard to explain this to many of his colleagues, who were averse to fitness routines of any sort, completely oblivious of the movement of fitness that had captured the imagination of likes of everyone, from Virat Kohli to even the PM Narendra Modi.

Reaching the Belaire gate at precisely 6:58 Rahul had the sweet satisfaction of completing the run within his target time. It will be this high which will help him to have survive another long day at work!

THE FESTIVAL OF FARAL
Push Ups and Pull Downs