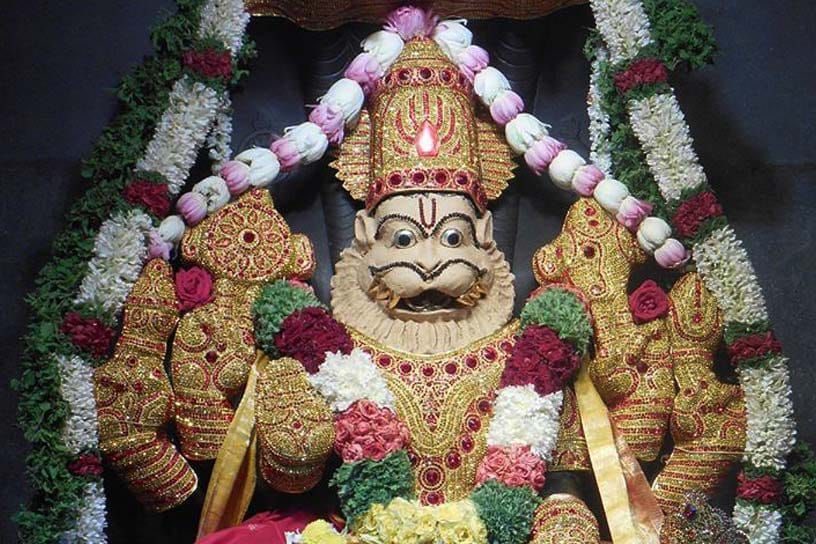 Happy Narasimha Jayanti 2022! This day is celebrated as the appearance day of Lord Narasimha, who is the fourth incarnation of Lord Vishnu.

Hiranyakasipu, the king of demons, wanted to become immortal, all powerful and the ruler of the universe. He performed severe austerities to please Lord Brahma. He received the benediction that he would not be killed by any living or non-living being, during day or night, inside or outside any house, on the sky or ground, by a weapon, human or animal or by any demigod, demon or snakes. He was also granted mystic powers and supremacy over the universe.

Prahlada was the son of Hiranyakasipu and had divine qualities. When Hiranyakasipu was away, his pregnant wife Kayadhu was attacked. Sage Narada gave her shelter in his ashram. He spoke to her about spiritual subjects. Still in the womb of his mother, Prahlada attentively heard from Narada and developed unflinching devotion to Lord Vishnu.

Once his father asked Prahlada what he considered to be the best. To which the child replied that a householder should give up the materialistic way of life and should focus his attention on devotion of Lord Hari. Hiranyakasipu did not like the answer and approached Prahlada’s teachers to protect him from the devotees of Lord Vishnu. They taught Prahlada of the supremacy of demons and tried to inculcate hostility towards Lord Vishnu in the child.

After some time had passed, Hiranyakasipu asked Prahlada about what he had learned. Prahlada did not speak of what he was taught by his teachers. Instead, he told his father of the teachings of Lord Narada.  In particular, he emphasized bhakti to Lord Vishnu and the nine processes of devotional service such as hearing, chanting, remembering, serving the lotus feet of the Lord, deity worship, praying, executing orders, serving as a friend and surrendering completely. Hiranyakasipu asked his son who had taught him all this.  Prahlada replied that bhakti can only be attained by serving the Vaishnavas, taking shelter of a pure devotee and not by one’s sole efforts or the efforts of others or a combination of both.

Hiranyakasipu was furious with his son. He threw him to the ground. He was unable to tolerate Prahlada’s love for Lord Vishnu. He ordered his servants to kill his son. Prahlada was thrown under the feet of elephants, was put among snakes, attacked with stones, hurled down from a hill, imprisoned, starved, given poison, exposed to severe cold, fire, water and wind. Yet he could not be killed.

Through it all, Prahlada’s unflinching faith in Lord Vishnu remained strong. He had no ill-will towards his father who tormented him. When all attempts to kill him failed, Prahlada was once again sent to school. The aim was to teach him materialistic subjects and train him in topics such as the duty of royal householders, economic development and sense gratification. In school, Prahlada instructed his friends of the importance of Vishnu bhakti. He talked about the importance of human life and the futility of pursuing material pleasures.

Prahlada doing kirtan with his friends

News of Prahlada’s activities reached Hiranyakasipu. He chastised his most elevated devotee son and asked him why he dared to disobey him and by whose power he became so fearless. To which Prahlada responded that the Supreme Lord is both the source of my strength and yours.  He implored his father to give up his demoniac ways. This angered Hiranyakasipu and he wanted to kill his son.  He challenged his son’s assurance regarding the omnipresence of Lord Vishnu. He asked his son if his God was present in the pillars of the palace. To this Prahlada confidently replied, “Yes!” Hiranyakasipu was so enraged that he struck the nearby pillar with his fist. All at once, the Supreme Lord Vishnu appeared from the pillar in the form of Narasimha, in the half-man and half-lion form.

There was a fierce fight between the two. Finally, Lord Narasimha killed Hiranyakasipu at sunset, using his nails and on the doorway. He did not violate any of the conditions of the boon given by Lord Brahma to Hiranyakasipu. Seeing the Lord’s anger, Prahlada tried to pacify him with prayers. He appeared before the Lord’s lotus feet. He offered Him his humble obeisances. Lord Narasimha looked upon Prahlada affectionately and put His hand on his head. Because he was touched by the Lord, Prahlada attained spiritual knowledge. He glorified bhakti as a means to attain true happiness. He prayed for all materialistic people who run after temporary pleasures. He did not want to be delivered alone but wanted to take all such people with him.

Lord Narasimha was pleased and offered to bestow Prahlada with any benediction. Prahlada glorified the Lord and expressed the desire to engage in His service always. He mentioned that a devotee should never be after personal sense gratification. That would make him a mere merchant who is engaged in the business of give and take.  He implored, “My Lord, if You at all want to bestow a desirable benediction upon me, then I pray from Your Lordship that within the core of my heart there be no material desires.” The Lord was very pleased with Prahlada and He blessed him with happiness in this life and a place in His abode, Vaikuntha in his next life. The Lord told him that he would be king in this material world and also have the opportunity to perform services to Him through pure bhakti-yoga. Prahlada thanked the Lord for His kindness and accepted what the Lord offered him.

Prahlada then asked the Lord for his father’s deliverance. Even though Hiranyakasipu had inflicted so much suffering on him, Prahlada had only his best interests in mind. Responding to his prayer, Lord Narasimha replied that his father had been purified along with twenty-one of his forefathers. He added, “Because you were born in this family, the entire dynasty has been purified.” The merciful Lord in this way protected and blessed His exalted devotee.

One cannot avoid death. If there is birth, there is death. One may devise plans to avoid death as Hiranyakasipu attempted, but ultimately the laws of nature prevail under the Lord’s supervision.

A person is not qualified or disqualified by his birth but by his qualities. Even though Prahlada was born in a demoniac family, he was divine and a great devotee of Lord Vishnu.

The Supreme Lord is situated in everyone’s heart. All living beings are equal. Under the influence of maya, we perceive others as friends or enemies. Prahlada did not like to discriminate between his friends and enemies. Being spiritually inclined, he was equal towards all.

Everyone has to be given respect, whether we agree with their views or not. Prahlada disagreed with the materialistic ways of his father and teachers yet he never disrespected them. He was both tolerant and humble.

No matter how strong evil is, in the end it is always defeated.

Money or power does not necessarily bring peace.

God always protects His devotees. The Lord does not tolerate violence against His devotees. One need not worry when one is surrendered to the Lord.

When one surrenders to the Lord, one is fearless and undisturbed as was exhibited by Prahlada.

A devotee knows that Lord is omniscient. He sees Him everywhere.

A devotee prays for the deliverance of even his enemies. He does not hold any grudges. He has compassion in his heart towards everyone. He is interested in getting others to make spiritual progress.

Based on Srimad Bhagavatam Canto 7 Chapters 3 through 10, translations and purports by Srila Prabhupada and on commentary by Gauranga Darshan Das.

Trying to grow in devotion to the Lord ...