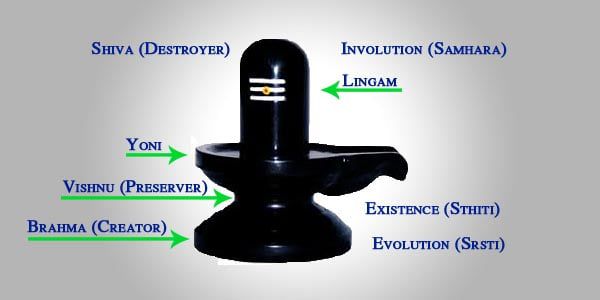 What is a Siva Linga?

The popular belief among foreigners is that the Siva-Linga represents the phallus or the virile organ, the emblem of the generative power or principle in nature. This is not only a serious mistake, but a grave blunder. In the post-Vedic period, the Linga became symbolical of the generative power of Lord Siva. Linga is the differentiating mark. It is certainly not the sex mark. You will find in the Linga Purana:

Meaning: “The foremost Linga which is primary and is devoid of smell, colour, taste, hearing, touch, etc., is spoken of as Prakriti (Nature).”

Linga means a mark, in Sanskrit. It is a symbol that points to an inference. When you see a big flood in a river, you infer that there had been heavy rains the previous day. When you see smoke, you infer that there is fire. This vast world of countless forms is a Linga of the omnipotent Lord. The Siva-Linga is a symbol of Lord Siva. When you look at the Linga, your mind is at once elevated and you begin to think of the Lord.

Lord Siva is really formless. He has no form of His own; and yet, all forms are His forms. All forms are pervaded by Lord Siva. Every form is the form or Linga of Lord Siva.

A Powerful Aid To Concentration:

There is a mysterious power or indescribable Sakti in the Linga to induce concentration of the mind. Just as the mind is focussed easily in crystal gazing, so also the mind attains one-pointedness when it looks at the Linga. That is the reason why the ancient Rishis of India and the seers have prescribed Linga for being installed in the temples of Lord Siva.

Siva-Linga speaks to you in unmistakable language of silence: “I am one without a second. I am formless.” Pure, pious souls only can understand this language. A curious, passionate, impure foreigner of little understanding or intelligence says sarcastically: “Oh! The Hindus worship the phallus or sex-organ. They are ignorant people. They have no philosophy.” When a foreigner tries to learn the Tamil or Hindi language, he first tries to pick up some vulgar words. This is his curiosity-nature. Even so, the curious foreigner tries to find out some defect in the worship of symbols. Linga is only the outward symbol of the formless being, Lord Siva, who is the indivisible, all-pervading, eternal, auspicious, ever-pure, immortal essence of this vast universe, who is the undying soul seated in the chambers of your heart, who is your Indweller, innermost Self or Atman and who is identical with the Supreme Brahman.

Sphatikalinga—A Symbol Of The Nirguna Brahman:

Sphatikalinga is also a symbol of Lord-Siva. This is prescribed for Aradhana or worship of Lord Siva. It is made up of quartz. It has no colour of its own, but takes on the colour of the substances which come in contact with it. It represents the Nirguna Brahman or the attribute-less Supreme Self, or the formless and attributeless Siva.

The Mystic Sakti In The Block Of Stone:

For a sincere devotee, the Linga is not a block of stone. It is all radiant Tejas or Chaitanya. The Linga talks to him, makes him shed profuse tears, produces horripilation and melting of heart, raises him above body-consciousness, and helps to commune with the Lord and attain Nirvikalpa Samadhi. Lord Rama worshipped the Siva-Linga at Ramesvar. Ravana, a learned scholar, worshipped the golden Linga. What a lot of mystic Sakti there should be in the Linga!

May you all attain the formless Siva through the worship of the Linga, the symbol of Lord Siva which helps concentration of mind and which serves as a prop for the mind to lean upon, in the beginning, for the neophytes.
Inspired by Swami Sivanand and Linga Purana and May be Some othere books