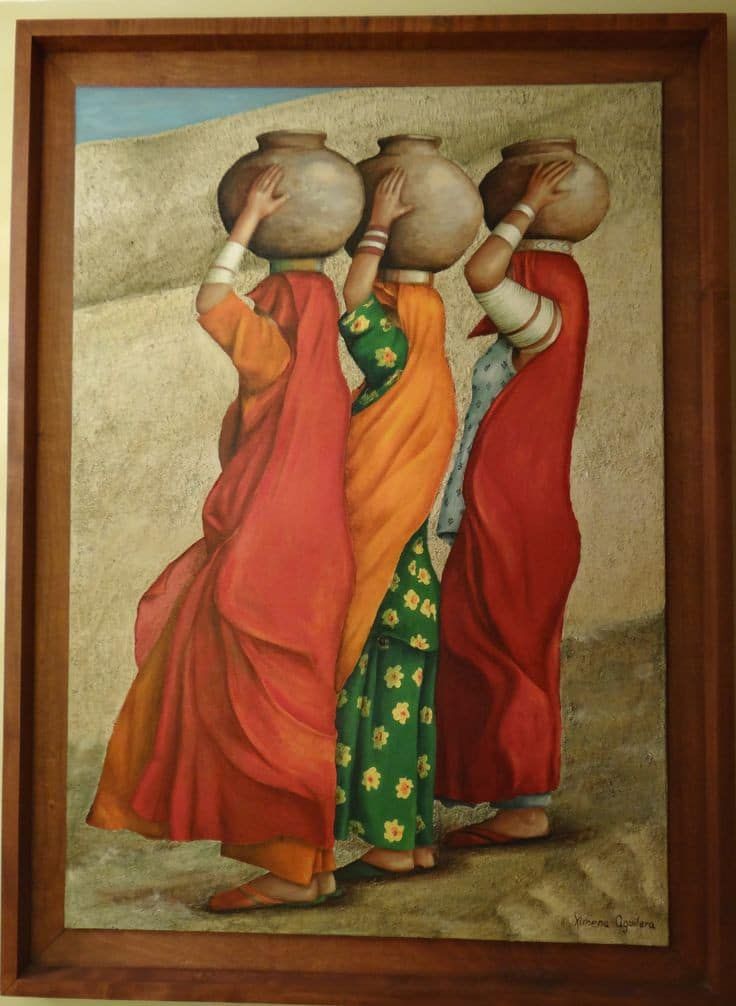 Pandit ji,have you ever seen a rural woman carrying pots?

Pandit : But king! Then what sort of divine experience is that it overpowers your intellect and you drown into darkness and sorrow ?

King : Neither I am a yogi, nor a sanyasi but I can assure that I am not in darkness, I am out of sorrow. I am in ecstasy where there is so much illumination that my own intellect has lost sight.It is a state where the wings of consciousness burn down , thoughts get dissolved,mind remains in inexpressible peace. I fall short of words to explain such experience Pandit ji.

Pandit ji : But if you are always in ecstasy how come you manage your duties as a king,I have seen you working just like before, rather better, where does your divinity go when you are too busy as a king ?

King : Pandit ji,have you ever seen a rural woman carrying pots? One pot on the other is kept on her  head, she walks while talking to her friends,along with that she also carries her baby and breastfeeds him and also answers the questions of her friends. Raja Janak is an example of a bhakta, a Braham Gyani and a great ruler.

When Krishna illuminated Arjun with Braham Gyan, then what he did was a murder or following his dharma ? Why to go far away Pandit ji,I have seen you many times eating paan and applying tactics to win the chess. Don’t you then think, the mind can do two things at a time, one consciously and another subconsciously.

Pandit ji when couldn’t come up with another disagreeing opinion, he abruptly asked the king :

In your opinion my majesty, Mansukh, the trader who was surrounded by serenity and love of Nanak, why did he then come here to do the trade ? Why hasn’t he become tyagi ( one who has given up all the pleasures), yet why is he still indulged in Maya of profits and losses ?

King : Giving up everything is not a fixed parameter to measure the spirituality of a person. It is the mind which needs to be bondage free.If a person walks on righteous path, doesn’t use unfair means to earn his living and fulfills the basic necessities of his body through such money and also takes out charity, he is not concerned about profits and losses, then I think such indulgence is better than tyaag. Whereas if a person is boiling in ego of being a tyaagi but still can’t fulfill his basic necessities, I think such deprived life makes him wrathful and he is never satiated, such tyaag is of no avail.

Pandit : You are so naive O King ! he might not be having greed for money, but he was after your throne, that’s why he exaggerated about the love of the divine to you and not to the poor.

King : You know Pandit ji, Mansukh never claimed himself to be a spiritual or religious person,when came here he was nabbed as an accused for not following the rituals of our land. But when he played the instruments of love, I was so enchanted that I was rather pleading him to take me with him. But he was that sanyasi who does not pluck flowers from their twigs, thus he told me to live a family life and remember your Guru and from that day, I am fragrant into the divine love. Pandit ji you need not to worry about the Kingdom, because my religion is love and now whatever I will do for the people, will be done in the love of God. Now I am all in love, If I rip off my heart ,you too will be smitten by the love that dwells within….

It has no ruffles, not a bit of anger,

So stay by renouncing your ego ;

Like the earth spread flat yet full of hope,

Waiting for the auspicious rain ;

The giver of the auspicious rain,

Is but your own benevolent Beloved !!

Night has gotten darker and stars brighter. Pandit ji’s eyes were closed and he too had tears in his eyes. In the meantime, an attendant came and said, ” your majesty, a sage has come into the dried abandoned garden and claims that he is…..

No Hurry……. No Worry
Yoginis